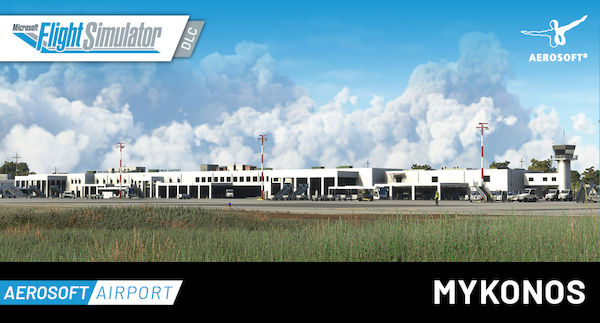 This product was added to our database on Friday 23 july 2021.

Product information: "Aerosoft Airport Mykonos"
Mykonos Airport (IATA: JMK, ICAO: LGMK) is the international airport of the Greek island of Mykonos. It is located 4 kilometers southeast from the town of Mykonos at a 405ft elevation. It serves flights to domestic and European metropolitan destinations due to the island being a popular leisure destination.

The airport first operated in 1971. It nowadays has a single runway designated 16-34 which is connected to the apron via two small taxiways, so backtrack is needed for every departure and landing.

The apron has been redesigned in 2020 to hold seven (7) parking positions, all of them requiring a pushback procedure. A renovated Terminal and a brand-new Fire station have been completed and delivered in May 2021.

Mykonos airport is equipped with and NDB (FREQ:401) a VOR (FREQ:110.00) navaid and has several instrument procedures (recently including RNAV).

Mykonos island is called "the island of winds". Most days of the year strong gusting winds (usually from North/Northeast) blow at the island and the airport vicinity. Those winds along with the short runway length (6.244ft) and the hills around it make the landing a challenging procedure!

Important note: 29Palms has already arranged a visit to Mykonos airport during summer 2021, to take pictures and create the renovated buildings of the airport (Terminal, fire station etc). This could not have been done earlier due to the recent delivery of the buildings (May 2021) and COVID restrictions. This update will be delivered as soon as it is ready free of charge.

Features:
Detailed representation of the terraforming of the airport's surrounding area
Sloped runway
High-detailed 3d objects and buildings
High detailed ground polygons and textures
Animated apron vehicles
Custom animated windsocks
Detailed representation of the airport's parking area
High detailed apron including the new airport's layout lines and signs
High detailed night lighting most of it being "physical" (dynamic lighting)
Fully custom taxiway, runway, reil and tower beacon lights. All the lights have been designed from scratch with custom 3d objects. Moreover, the intensity and color of their glow has been trimmed so that the outcome is much less intense and much closer to the real airport
Custom Hazard beacon lights at airport's surrounding area (on top of the surrounding hills)
Custom boats and ships at the island's port
Three existing heliports are present in the scenery:
Army's Heliport at the east of the airport
Marina's Heliport close to Ornos beach
Superior Air heliport close to Kalo Livadi beach
Three characteristic landmarks have been added to the scenery:
Windmills at Mykonos town
Broken windmill at the south of the airport (close to the Terminal)
A lighthouse at the north of the island