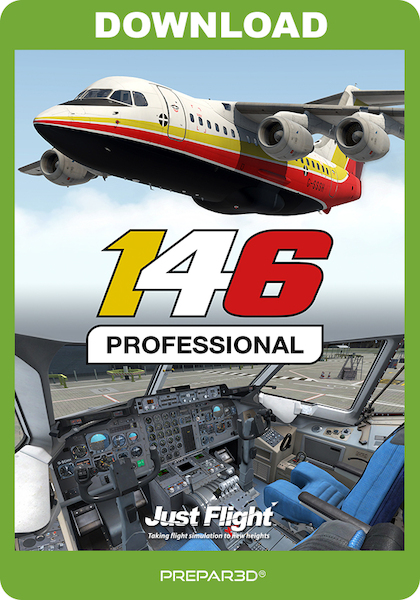 This product was added to our database on Wednesday 23 June 2021.

Product Information:
Following on from their award-winning L-1011 Tristar Professional, Hawk T1/A Advanced Trainer and PA-28 family of aircraft, this highly detailed simulation of the 146 regional jet has been developed by Just Flight's in-house team following comprehensive, hands-on research with a real-life aircraft, G-JEAO, which retired from service with British European Airways in 2000 and is now preserved at the de Havilland Aircraft Museum, and the CC.Mk2 and C.Mk3 aircraft of Royal Air Force, 32 (The Royal) Squadron.

Just Flight are excited to bring you the 146 'Whisper Jet' – featuring the 100, 200 and 300 series of this classic British airliner. The design process of what was to become the 146-100 began under Hawker Siddeley in 1973 where the iconic high T-tail, short undercarriage, four engines and distinctive airbrake were chosen to produce a regional airliner with short-field performance and quiet operation. The 146-100 first flew in 1981, followed by the stretched 200 series in 1982 and 300 series in 1988.

The Royal Air Force purchased three 146-100s in 1986 and these were operated by The Queen's Flight, designated the CC.Mk2 'Statesman' and equipped with VIP cabins. The aircraft were used to transport the British Royal family and senior members of the UK military and government.

The 146 was also popular with cargo airliners due to its excellent capacity and low engine noise, allowing for night flights into city-based airports. Two cargo variants were developed, the convertible passenger and freight variant (QC) and the freight-only Quiet Trader (QT). The Royal Air Force now operates two 200QC aircraft, designated the C.Mk3.

The exterior models are stunningly detailed, featuring 4096 textures for incredible clarity and the latest Physical Based Rendering (PBR) material technology to produce realistic metallic, plastic and glass surfaces (requires Prepar3D v4.4 and above). Realistic animations include trailing-edge flap mechanisms, spoilers and large tail-mounted airbrake, and all passenger and cargo doors.

Moving to the cockpit, the Captain and First Officer positions are modelled with hundreds of functional switches, knobs and controls. The aircraft features complex and detailed custom-coded systems, including hydraulic, electrical, fuel and pressurisation, and the cockpit is also fitted with a functional Thrust Management System (TMS) and comprehensive navigation equipment, including an FMC.

The aircraft are brought to life with immersive dynamic lighting and 3D sounds, with unique flight dynamics for each variant and custom effects from condensation and contrails to realistic exterior lighting.

The 146 was flown all around the world and over 30 airline liveries from the UK, USA, Europe and Australia are included, including many iconic airlines and paint schemes.

COCKPIT:
• Captain and First Officer positions are modelled with hundreds of functional switches, knobs and controls
• A truly 3D cockpit environment right down to accurately modelled seat belts and screw heads - every instrument is constructed fully in 3D with smooth animations
• Cockpit textures feature wear and tear based on reference photos taken in the real aircraft to produce an authentic environment
• Interactive checklists for every stage of flight
• Panel state system which will automatically save the panel state whenever a flight is saved and reload the panel state whenever that flight is loaded
• Aircraft configuration system that will allow you to choose between 'cold & dark' or 'ready for take-off'
• Many features have been added to help with usability such as the ability to hide the control yokes for a better view of the instruments and pre-set angled views for the overhead panel, centre pedestal and jump seat
• Flight computer panel with useful information such as fuel burn, endurance, speed and wind speed/direction

LIVERIES:
The 146 comes with a variety of airline liveries from the UK, USA, Australia, Europe and more. A Paint Kit is available to download from Just Flight's Support section.

SYSTEMS:
Custom-coded aircraft systems with a high degree of complexity and depth, including:

Air-conditioning and pressurisation system:
• Automatic and manual pressurisation modes with control of outflow valves, barometric and cabin rate settings, indications and cabin altitude warnings
• Cabin altitude and differential values based on real-world data
• Automatic and manual flight deck and cabin temperature control – takes account of ambient temperature, air supply from the engines and/or APU, fresh or recirculated air and even whether the doors are open!

FDE and effects:
• Realistic and accurate performance in the air and on the ground, using unique flight models for all variants based on real-world performance and handling data, and input from real-world 146 pilots.
• Custom effects for enhanced immersion, including engine exhaust, wing condensation, cruise contrail, and ground splash in wet/snowy conditions from all six landing gear wheels.
• Complete exterior lights package as seen on the real 146 including landing, wing, runway, logo and taxi lights that illuminate objects and the ground, for ease of operation during the hours of darkness.