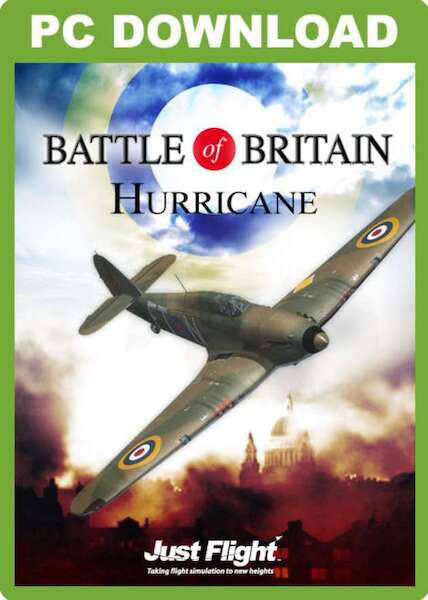 This product was added to our database on Wednesday 13 August 2014.

The Hurricane lost out somewhat in the fame stakes to the much more famous Spitfire, but the reality is that Hurricanes accounted for more air victories than Spitfires in the Battle of Britain. It was a more robust aircraft, and its fabric-over-frame construction meant that it was cheaper and quicker to build and repair than the Spitfire with its monocoque all-metal construction.

The Prototype first flew on the 6th November, 1935, and the machine was steadily improved and altered to eventual production standard. Our Battle of Britain Hurricane package includes three versions of this remarkable aircraft, from the Prototype through the early Mk1 two-bladed Rotol propeller version to the Mk1's more refined three-bladed propeller type.

All the aircraft from this Hurricane add-on are also available in the Battle of Britain 70th Anniversary package (Download and Boxed) which also includes our Spitfire and Me 109 add-ons.


Virtual Cockpits
•Completely modelled to portray the real cockpit in full detail
•Every switch, knob and lever works, most with bespoke animation code
•Shadow textured where appropriate
•Ring-and-bead and reflector gun sights depending on variant.

Prototype K5083 - First flown on 6th November, 1935, the prototype Hurricane differed in many ways from the production models. A retractable tailwheel (later removed) no armament or armour and a simple design of canopy and windscreen were some of the differences. This machine was steadily improved to eventual production standard.

First production Hurricane FT-N L1723 (Battle of France era) - FT-N was flown by F/O Patrick 'Tiger' Folkes of 43 Squadron from Ackilington, England in February 1940. It was in this machine that Folkes shot down a Heinkel He111 to score the first 'kill' in WWII over British soil.

First production Hurricane JX-G (Battle of France era) - JX-G was flown by P/O Paul Richey of 1 Squadron based at Berry-au-Bac, early in May 1940. What's notable about this airframe is the way that the squadron codes have been painted over. The coloured diamond shape on the port wing was a gas detection device - the paint changed colour when gas was present. Early in the war, the High Command believed that Germany would employ chemical weapons, as it had done in WWI.

Early production Hurricane L1584 from 1938 - During this time various squadron marking schemes were being trialled, along with camouflage. This machine has the squadron number 111 painted half in white and half in red and the squadron arms and motto carried on the tail. There was much confusion over the application of the recommended 'day-night' scheme for the undersides, and 111 machines continued with silver grey on all but the outer wing panels, which were duly finished in day-night. L1584 was flown by Squadron Leader Gillians.

Royal Yugoslav Air Force - Other countries' air forces took Hurricanes on charge from quite early on in WWII. During 1938 the Yugoslav government concluded an agreement with Hawker to purchase 12 Hurricane MkIs for the Royal Yugoslav Air Force and followed this up with an order for 12 more together with a manufacturing licence to allow production of the fighter at the Rogozarski and Zmaj factories. By the time of the German invasion of 1941 only 20 machines had actually been delivered.

Standard RAF Hurricane Mk1 UP-W R4118 (Battle of Britain era) - UP-W was flown by pilots of 605 Squadron. Having fought through the entire war, R4118 ended its days as an instructional airframe in India. Salvaged and restored, this venerable airframe still flies today.

Standard RAF Hurricane Mk1 KZ-W L1592 (Battle of Britain era) - KZ-W was flown by pilots of 615 Squadron during the Battle of Britain. This airframe survives and is preserved in London's Science Museum.

Standard RAF Hurricane Mk1 YB-W P3878 (Battle of Britain era) - A machine of 17 Squadron, flying form Debden in July 1940. Flown by F.O. H.A.C. Bird-Wilson, she differed from the standard schemes of the day in having a 'sky'-coloured spinner instead of the authorised black 'night' variety.

Standard RAF Hurricane Mk1 LE-D V7467 (Battle of Britain era) - This machine was flown by the legendary Sq.Ldr. Douglas Bader, the disabled ace who led 242 Squadron and lobbied strongly for the controversial 'big wing' theory eventually adopted by the RAF.