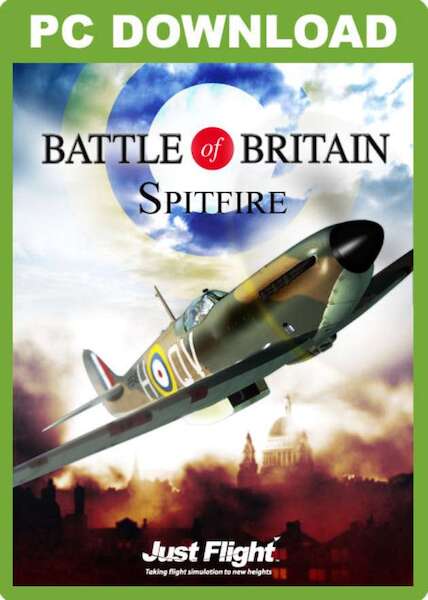 In this simulation we have captured the Spitfire as it was in perhaps the most important phase of its development - the early years of WWII. We begin with the Prototype as it was rolled out of the factory and first flown at Eastleigh in 1936, and end with the Mk1A 'standard' production Spitfire which fought alongside that other venerable fighter, the Hawker Hurricane, in the Battle of Britain.

The supplied paint schemes include a number of aircraft flown by the 'aces' of the Battles of France and Britain and the flight dynamics of this simulation have been specially programmed to allow you to fly 'by the book', so go ahead and try your skill at 'matching the numbers' achieved by 'Mutt' Summers and Jeffrey Quill in the prototype, or test your nerve on an endurance run over the fields of France and back in your Mk1A!

Custom built exclusively for Just Flight, with an incredibly detailed and ultra-high quality cockpit, exacting flight dynamics and realistic Merlin engine sounds, this is the ultimate Spitfire package for FSX!

All the aircraft from this Spitfire add-on are also available in the Battle of Britain 70th Anniversary package (Download and Boxed) which also includes our Hurricane and Me 109 add-ons.

The Prototype Spitfire K5054 first flew on March 5th, 1936, with Captain 'Mutt' Summers at the controls. The airframe was finished in primer paint and the engine panels in bare aluminium alloy. The aircraft lacked radio equipment and carried the bare necessities for testing. Born out of the Schneider Air Race aircraft, the Spitfire was to become the iconic British aircraft of the Battle of Britain during WWII, and its slim fuselage and distinctive elliptical wing shape mean it is still instantly recognisable.

Prototype K5054 -first flew on March 5, 1936. The airframe was finished in primer paint of varying colour density and the engine panels were left in bare aluminium alloy. The aircraft lacked radio equipment and carried the bare necessities for testing. Captain 'Mutt' Summers was at the controls.

Prototype K5054 - as seen at Hendon Air Pageant in the new types park, 1936. Wheel spats had been added to the oleo struts and covered the entire well with smaller folding spats at their ends.

19 Squadron Mk1 K9795 with two-blade, fixed-pitch Watts wooden propeller and flat perspex canopy. Also, note the 'ring and bead' gunsight and early aerial. This was the first production Spitfire to be delivered to the RAF for operational use.