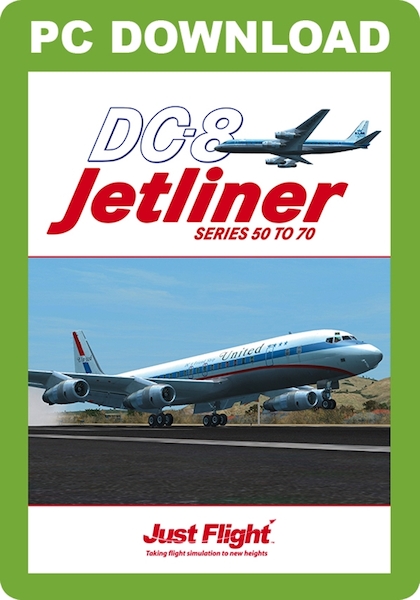 This FSX collection of the later DC-8 models includes nine models in a total of 20 liveries, with three different virtual cockpit configurations complete with Engineer's and Navigator's panels.

2 August 2017 - this DC-8 collection has been updated with a number of enhanced features:

This FSX and Prepar3D collection covers the short fuselage -50 series up to the ultra-long stretched -73 series and includes three distinctive cockpit variations from the classic round-dial analogue version through a part-modernised version to the modern 'glass cockpit' variant in the later models.

This collection of the later series of DC-8 models, complete with 20 high-resolution liveries from around the globe, combines all the very latest modelling and texturing techniques with accurate flight dynamics and realistic sounds to bring you an authentic simulation of these iconic aircraft!

Every model is built over accurate factory standard plans and all feature the characteristic 'double bubble' fuselage, nose 'nostrils' and multi-pane cockpit glazing that make this aircraft so distinctive.

As a special bonus the unique US Navy EC-24A aircraft is included. With a myriad of 'lumps and bumps' and antennas all over the aircraft, it's not hard to guess its role in electronic warfare training.

Pratt and Whitney and CFM-56 engines on the later versions, all modelled with their own unique reverse thrust operation.
Many unique animations, including retractable landing lights, opening pressure valve gate in the tail, rams and operating levers for the spoilers and flaps and, of course, the trim-adjustable flying horizontal/elevator tail assembly.
Authentically modelled and animated landing gear with details such as springs, detailed brake lines and wheel cylinders. Earlier models than the -62 feature the distinctive swivelling rear main undercarriage bogies.
Pre-flight flags, wheel chocks, cargo loading scissor lift, air start truck and self-powered entry stairs all add to the authentic feel of this classic jetliner.
Realistic wing flex and many special effects which include the incredible smoke clouds and trails from the early DC-8 jets and reverse thrust smoke coming from the apertures in each engine when reverse thrust is applied.
The complex virtual cockpit has been built with authenticity in mind - the Engineer's station alone contains hundreds of realistically operating switches and dials for monitoring the engine, hydraulic, electrical and fuel systems. Just about every switch, lever and knob is operational and functional. Flight instruments can be set up just like the real thing.
A very realistic (and noisy!) sound set is included for the Pratt and Whitney JT range of engines fitted to the -50, -60 and EC-24A models with their distinctive 'howling' air start and another custom set is provided for the quieter CFM engine used on the -70 series.

Specular map to give realistic light effects on the aircraft surfaces.
Bump mapping for a more realistic 3D effect on liveries.
Realistic wing flex on all variants.
Custom coding ensures that the systems are faithfully reproduced, including unique features such as spoiler 'lock-out' when gear is retracted.
Animated main-gear bogies which rotate to reduce stress on the tyres and wheels in tight turns are operational on the pre-62 models.
Special slats in the leading edges of the wings open ahead of the main flaps and the full slotted-flap system is faithfully reproduced on these models.
Numerous authentic animations are included such as retractable landing lights, opening pressure valve gate in the tail, rams and operating levers for spoilers, and trim-adjustable flying horizontal/elevator tail assembly.
Landing gear is accurately modelled and animated with all the correct struts and springs and even detailed brake lines and wheel cylinders.
The real DC-8 has a unique way of employing engine thrust reverse whilst in flight to assist with air braking. The conventional wing spoilers are not used (only as spoilerons and only then with the gear extended). This is all simulated in DC-8 Jetliner Series 50 to 70!

The -53 series 'traditional cockpit'. This is also available as an alternative in the -61 to portray the -61 'early' aircraft version.
The -60 series 'modern cockpit' has later-style radios and an FMC (Flight Management Computer) fitted. This cockpit is used in all the -60 series including the -61 'modern' version.
The -70 series has its own 'glass cockpit' with PFD, MFD, FMC and other modern equipment.

Virtually all of the hundreds of switches, knobs and levers are animated and functional. Many gauges are modelled in 3D for smooth operation.
Engineer and Navigator panels are included. The Engineer's panel features functioning engine, hydraulic, electrical and fuel systems.
Full cockpit lighting with atmospheric instrument backlighting.
Special 'baked' textures have been used to present a well-used look to the cockpit area and controls.
Avionics include full autopilot functionality from the operating period with NAV and ILS approaches, VOR and ADF receivers and displays, transponders and a full communications suite.
Many features have been added to help with 'usability', such as switches to hide the control yokes and co-pilot's seat for better views and pre-set angled views for the overhead panel, throttle quadrant and radios.
Numerous warning annunciators will illuminate on fault detection and a fully functional engine fire warning and protection/extinguishing system are built into the cockpit.
Electrics have been authentically modelled to enable correct engine starts with ignition lock-out and over-ride functions for each engine starter.
Special programming code has been used to re-create the complex fuel storage and delivery systems for each engine - the authenticity is such that you can follow the procedures laid down in official flight manuals for setting up the fuel panels and levers for different situations and, of course, the correct engine start sequence.

Flight files have been developed by a real-world DC-8 engineer and tested by flight crew with real-world DC-8 experience. Correct fuel systems and other engine maintenance routines are included.

A professionally produced stereo sound set is matched to the different engine types: the Pratt and Whitney JT range of engines for the -50, and -60 with their distinctive 'howling' air start, and another authentic set for the quieter CFM 56 turbo fans on the -70 series aircraft.

Special effects have been created to reproduce the incredible smoke trails the earlier DC-8 jets produced. These are, of course, far less noticeable in the CFM 56 engine versions!. Correct reverse thrust smoke has also been modelled and can be seen streaming from the apertures in each engine when reverse thrust is applied.

When using the fuel dump facility, the dumped fuel can be seen streaming out of the wing vents.

A professional-standard paint kit is available to download so you can create your own liveries.
Reviews
System Requirements: