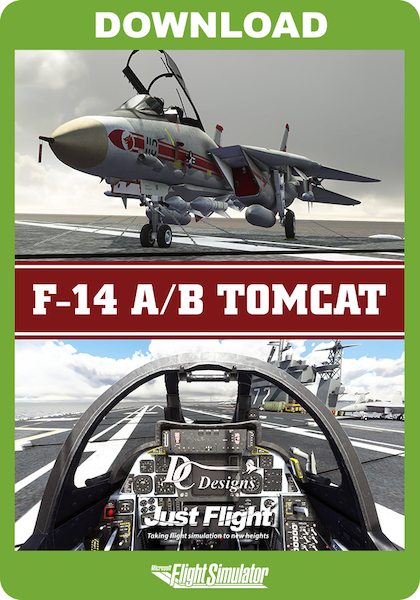 This product was added to our database on Thursday 30 September 2021.

All models have been coded with Microsoft Flight Simulator native 'Model Behaviors' animations and built to MSFS operational specifications to prevent issues with future simulator upgrades. All custom cockpit instruments and screens are coded in HTML for native, high-performance display in MSFS The Tomcats make use of the new simulator's features such as effects and sounds, fully reflective glass, native aerodynamic sound structures, the new 'Modern' aerodynamics system with the ability to provoke 'departure spins', and customised visibility controls for wheel chocks, covers, tie-down chains and GPU The Tomcats also contain custom-built and animated effects such as afterburners Full compressor-stall engine modelling and coding for the F-14A TF-30 engines Other features include authentic cockpit night lighting with brightness controls, which includes user-operated 'slime lights' for combat operations, and custom-coded manoeuvring flaps, slats and intake ramps, all based on aircraft airspeed and angle of attack Numerous external animations including canopy, crew ladders, tail hook and control surfaces The F-14 Tomcats are fully compliant with Virtual Reality headsets Full custom sound sets for both the TF-30-powered F-14A Tomcat and the GE-F110-powered F-14B Tomcat

3D modelled dials, ADI, 'whiskey' compass and other high-detail instruments designed to emulate the appearance of the real F-14 Tomcat Display screens with visual layouts based on the real aircraft's systems (within the confines of MSFS' current capability) Head-Up Display with authentic layout based on the real F-14A Custom-coded, user-controlled ordnance via the simulator Payload Manager, allowing for live mounting of weapons on hardpoints with active weight increase F-14 Tomcat systems include Direct Lift Control, CADC and basic ACLS The aircraft are compatible with the Hard Deck Simulations Aircraft Carrier Module

VF-143 Pukin' Dogs VF-32 Swordsmen VF-213 Black Lions A Paint Kit is also provided. Manual A full operations manual is included in the software and you can also download it here. DC Designs' F-14 Tomcat is designed to provide a top-quality aircraft that is extremely detailed, yet less demanding to fly than today's most complex procedural simulators. Equipped with all required avionics, and with custom-coded animations and systems, the DC Designs F-14 Tomcat is designed to be accessible to all users without the need for intense study.