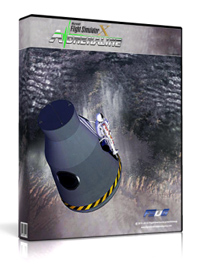 This product was added to our database on Monday 23 february 2015.

Mission List:
Introduction: Get familiar with the FTII world and see how these new missions work
Beyond The Ice: Rescue a team of scientists in the perpetual ice of the Antarctica - and prepare for the unthinkable...
Crucial Extraction: In a country far away, extract a team of peacekeepers while getting caught in the crossfire of two opposing armies
Grand Canyon Air Race: Compete in the ultimate air race through the world-famous Grand Canyon and beat several (AI) opponents to win the trophy!
Grand Canyon Air Race - Qualifying: Of course, before competing, you have to qualify first!
Heavens Gate: ADRENALINE at its best: Spread your arms and soar through a mountain (!) at the world`s best base-jump location, Tianmen Mountain, China
Use the Merlin Helicopter to help set up masts for a ski-lift in the Swiss Alps. Only experienced Heli pilots will master this job!
Sonic Boom: Reach Mach 1 to break both, the sound barrier and the record for the fastest car ever, with the 17,000BHP MaxxThrust rocket car!
Singapore Air Taxi (SPAT): Be a helicopter taxi pilot in the famous metropolis and build your career, flying VIP passengers all across the city state
Strictly Legal: The bastard is back! Accompany a `friend` you met years ago in Peru (see Flight Tales I - Peruvian Rain) in a bring-and-collect mission that might question your moral integrity...
Swallowed: Be the first man to actually fly a helicopter into one of the biggest caves on Earth! Lots of Adrenaline in this never-done-before mission!
The Dive: Probably a familiar story these days: Ascend to the edges of the stratosphere and jump down, using a jet pack and a parachute to return to Earth in style
Top Shot: Perform a fighter training with the new ADRENALINE Lock-On technology that enables you to actually lock onto the training targets!
Tough Comeback: Your return from the Patagonian Ice Field after a weekend on the glacier is much more than a Birthday Surprice - it`s a fight against the forces of nature...
Twisted Prediction: Take radar images of a building storm with potential tornados, and prepare yourself for a weather phenomenon you have never, ever seen in Flight Simulator!
Uberpower: For the first time ever, compete in a Flight Simulator race - on water! Control your ADRENALINE as you compete against tough opponents in a powerboat race on Lake Maggiore, Switzerland