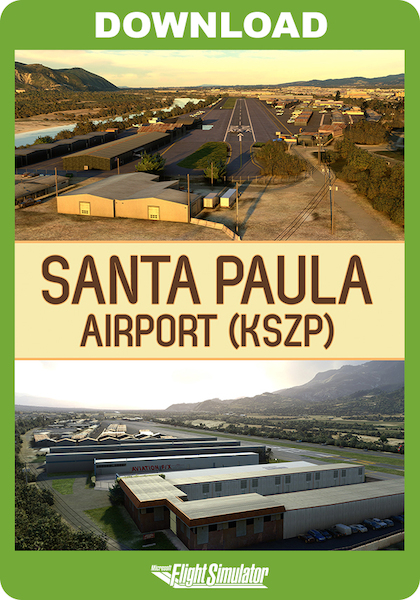 This product was added to our database on Tuesday 3 August 2021.

Product description
Product Information:
Santa Paula Airport (KSZP) is a privately owned, public use airport located one nautical mile (2 km) southeast of the city of Santa Paula in Ventura County It exclusively serves privately operated general aviation aircraft with no scheduled commercial service and is home to over 309 individual aircraft.
Covering an area of 51 acres, at an elevation of 243 feet (74 m) above mean sea level, the airport has one runway with an asphalt surface and one helipad designated. With an average of over 266 take-offs and landings a day, its busy traffic and a pattern altitude of just 850 feet, plus electrical wires on short final, landing at Santa Paula demands focus and skill from the pilot.
Santa Paula is just a short hop away from many of Southern California's other unique locations and is also a popular attraction for general aviation in the SoCal area. Because of its very attractive fuel rates, many aviators make a stopover here before heading home.
This scenery is designed for Microsoft Flight Simulator as a tribute to the airport of Santa Paula, attempting to honour every part of its history. It makes use of all the incredible features the Microsoft Flight Simulator platform has to offer, such as high definition full PBR texturing and incredibly detailed modelling of the 100+ hangars and buildings at Santa Paula.
Features:
Detailed modelling of 100+ hangars and buildings Meticulous focus on details, creating an immersive experience at the airport Custom animated and weather-responsive elements such as windsocks and flags Fully designed for Microsoft Flight Simulator with hand-crafted PBR textures for every object creating realistic depth, roughness, shadows, and highlights Complete night lighting environment for the entire airport area Enhanced elevation Enhanced grass and vegetation on and around the airport Realistic markings and obstructions on and around the airport Tested and validated by actual residents and aviators from the Santa Paula airport community System Requirements:
Microsoft Flight Simulator (i.e. the 2020 Standard, Deluxe or Premium Deluxe edition of Flight Simulator - NOT FSX or any previous edition)
Processor: Intel i5-8400 / AMD Ryzen 5 1500X
Memory: 16GB Graphics card: nVidia GTX 970 / AMD Radeon RX 590
Video memory: 4GB OS: Windows 10 version 18362.0 or higher