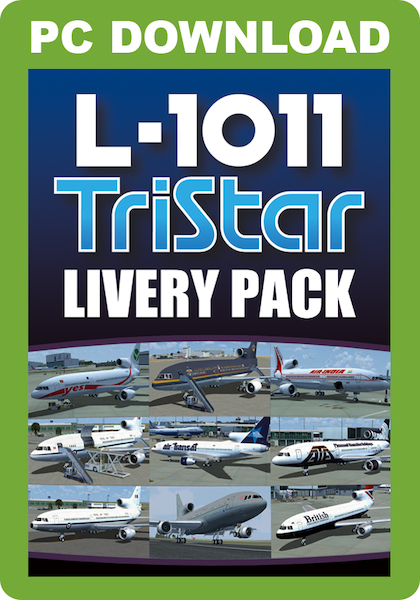 This product was added to our database on Thursday 21 August 2014.

Are you enjoying the Just Flight L-1011 TriStar Jetliner? Would you like some additional TriStar liveries to make your flights to more worldwide destinations even more realistic? Then this pack is for you!

The ten civilian liveries cover airlines from Europe, North America and Asia and bring you a mix of well-known airlines and more obscure carriers.

Six military liveries are also included and these depict a mixture of old and new RAF paint schemes.

This is the first scheme worn by RAF aircraft after they had been received from Marshall Aerospace after it had completed the modifications to adapt this once civilian passenger plane into a military transport aircraft. This aircraft is one of the three that were purchased from Pan Am.
•C2, White Scheme (ZE704)

As the aircraft passed through Marshall Aerospace they adopted this gloss white scheme. This scheme was in use from the late 1980s until 2007.
•C2A, White Scheme (ZE704)

This aircraft, originally purchased from British Airways, is used both in cargo and air-to-air refuelling roles.
•K1, Grey Scheme (ZD951)

This grey scheme was adopted in 2005 and remains in use today. This aircraft is one of those purchased from British Airways.
•K1, Low Viz Scheme (ZD949)

This low-visibility scheme was adopted in 2005 and remains in use today. ZD949 was sent to Marshall Aerospace's facility at Cambridge airport in 2007 to be the first RAF TriStar to be upgraded with new avionics. Following completion of the upgrade in 2010 the announcement was made that the TriStar would be retired in 2013 and therefore the upgrade program was cancelled. This decision resulted in ZD949 being reduced to spares.