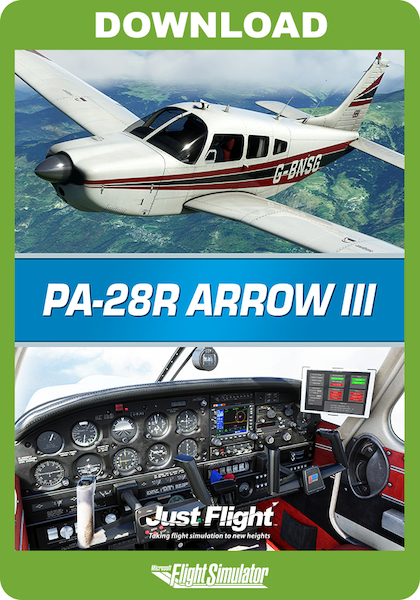 This product was added to our database on Wednesday 11 August 2021.

First available in 1977, the Arrow III was the first turbocharged variant of the PA-28R Arrow, retaining the conventional tail of the Arrow III and a new cowling which housed the six-cylinder turbocharged engine. The Turbo Arrow IV followed in 1979 and featured a distinctive T-tail.

The PA-28R Arrow III is a four seater, piston-engine aircraft equipped with a retractable tricycle landing gear and constant-speed propeller – an ideal aircraft for touring and instrument training. The aircraft is flown all around the world and this add-on reflects that global popularity. Including our UK research aircraft, G-BGKU, the package features eleven liveries from the USA, Canada, UK, France, Switzerland, Australia and Germany.

Liveries:
The aircraft is supplied in the following 11 paint schemes:

Flight dynamics:
The Arrow III features realistic and accurate flight dynamics based on real-world performance and handling data, and input from Arrow pilots.

Manual:
A comprehensive PDF manual with panel guide and flight tutorial is included as well as an Operating Data Manual with performance data.