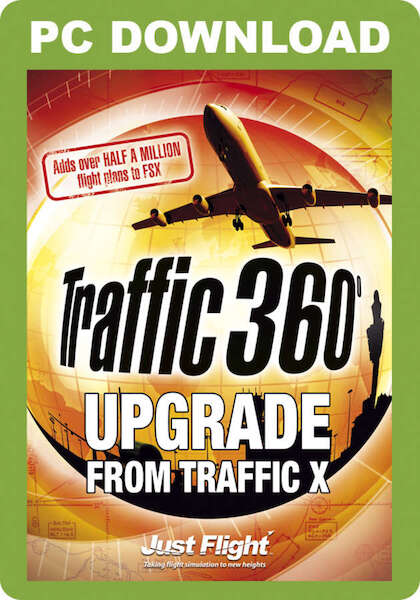 This Traffic 360 Upgrade will update the Download or Boxed editions of Traffic X to the full Traffic 360 specifications.

If you are not currently a Traffic X user, please see the Download and Boxed editions of the full Traffic 360 add-on.

With a host of custom utilities and innovative functionality to control and monitor your AI traffic around the globe, this is THE essential addition to your FS world!

NEW! 312 new and updated aircraft liveries, bringing the total number of aircraft variants to 2,420. All the aircraft from Traffic X and the three Traffic X PlusPaks are included.

NEW! Improved detailed animations such as flaps, landing gear and animated passenger doors on turboprops and short range jets. Turboprops and small jets that do not use the terminal docking jetways are equipped with steps.


NEW! 29 custom sounds for AI aircraft, including reverse thrust on the appropriate aircraft.

NEW! Traffic 360 features the most realistic flight schedules ever! The data is from real-world flight schedules covering the entire globe and over 612,000 flight plans are included for international, national, regional, commuter and cargo flights.

Driveable Follow Me car and pushback truck - you can explore the airport from the ground!


Aircraft take advantage of the advanced FSX animation features at airports such as baggage handlers, docking jetways and pushback tugs. These service vehicles will service AI aircraft when they park and, when they are ready to depart, the pushback tug will push the aircraft back off the stand (only operates at stands enabled for this feature by default in FSX).

All aircraft are painted in real-world airline liveries with updated and improved reflective textures and real aircraft registrations. 500 liveries are included for 123 different civil and military aircraft types, giving a total of more than 2,400 aircraft variants: