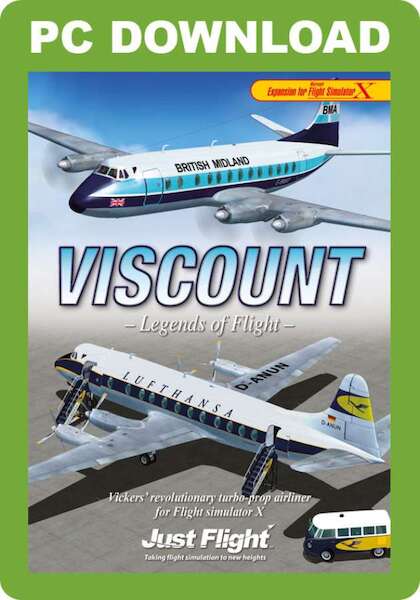 The Vickers Viscount was a major success in Britain's aviation industry, being the right aircraft at the right time. Viscounts were registered in over 70 countries; 445 aircraft were built and used in service around the world.

Viscount - Legends of Flight features the -800 series of the marque, with the longer and more elegant fuselage, and takes you back to the heady days of classic aviation with 12 liveries, many of which have long disappeared from the skies.

Designed and built exclusively for Flight Simulator X, Viscount - Legends of Flight features an authentic Virtual Cockpit which is shadow textured as appropriate. All switches, knobs and levers are animated, most with bespoke animations, and the Co-pilot/Engineer station has functional gauges, knobs, levers and switches.

A layered, tiled paintkit is supplied so you can create your own liveries (suitable additional paint program such as Photoshop required).