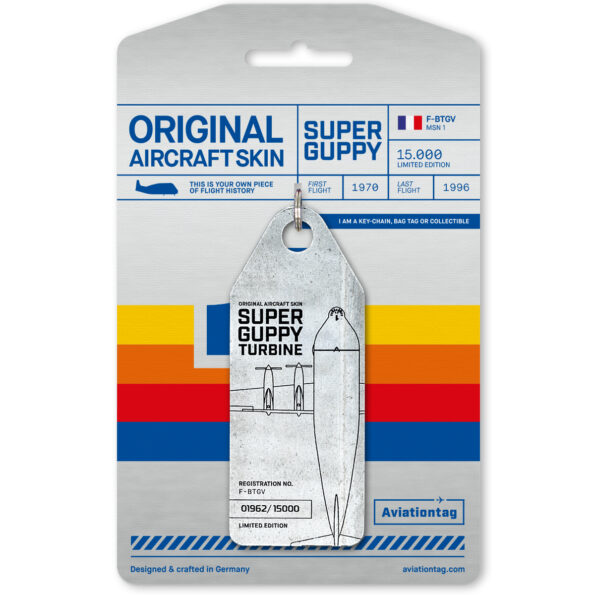 The extremely rare F-BTGV freighter – a Super Guppy Turbine (SGT) built by Aero Spacelines – was built in the 1960s on the basis of the Boeing 377 Stratocruiser and over the course of its life primarily transported aircraft parts for the Concorde and Airbus models to the final assembly factory in Toulouse. It is the first of just two Super Guppies to have been used by the world's largest aircraft manufacturer, Airbus.

The Super Guppy with its voluminous fuselage was in service for almost a quarter of a century, making its last flight to Bruntingthorpe/England on 1 July 1996. There, from 2009 onwards, it was lovingly and devotedly maintained and restored by the "Super Guppy Restoration Project".

Only five Super Guppies have ever taken to the skies and we are thrilled to now bring this historic freighter home to you as an Aviationtag!

Note: If it's a new-looking tag without scratches and patina that you're after, then this is not the edition to go for. The Super Guppy Aviationtag series shows clear signs of the many years of service performed its time out in Bruntingthorpe – each Aviationtag bears the marks of aviation history and has imperfections, scratches and parts where the paint is flaking on the back, but that is what makes each and every tag one-of-a-kind.

The front-side of the Aviationtag is blanc aluminum which is why we printed the tag instead of laser engraving it. The print is rather sensitive, please be extremely careful how you use it.