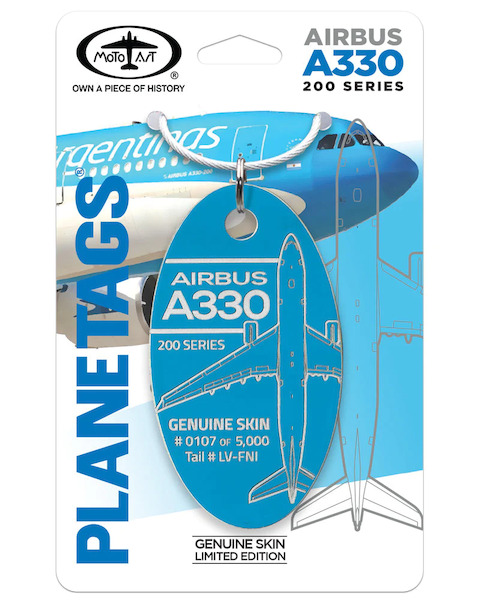 Keychain made of real aircraft skin: Airbus A330 Aerolíneas LV-FNI MotoArt's quest to catalog the world's aircraft continues with a commercial aircraft - the Airbus A330-200, last flown by Aerolíneas Argentinas from 2013 to 2021. Meet LV-FNI.

LV-FNI (msn 290) was built as an A330-223 and took its first flight in July 1999. It was then delivered to Sabena and later to Malaysia Airlines before becoming part of the Aerolíneas Argentinas widebody fleet as LV-FNI. LV-FNI was used for international long-haul routes connecting Argentina to the world with flights to cities such as Madrid, Rome, New York, and Miami before being retired to Roswell, New Mexico, in 2021. MotoArt welcomes LV-FNI as the newest addition to its fleet of PlaneTags.

MotoArt is thrilled to welcome another SkyTeam member - Aerolíneas Argentinas - to the fleet with the release of our A330-200 PlaneTags in stunning sky blue livery. Don't miss this release - these gorgeous A330-223 PlaneTags belong in your collection.