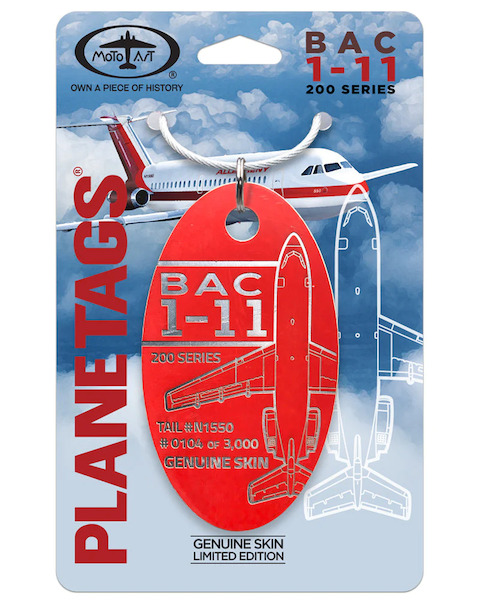 This product was added to our database on Thursday 17 November 2022. MotoArt salutes another remarkable British aviation icon - The British Aircraft Corporation 1-11. N1550 flew for Braniff International Airways and Allegheny Airlines in its heyday and now you can add it to your own PlaneTags fleet!

The BAC 1-11 was a short haul, British-built jet airliner, produced by the British Aircraft Corporation (BAC) from 1964 to 1982, and in Romania as the Rombac from 1982 to 1989. 244 total were built, 235 in the UK and 9 in Romania. British United Airways (BUA) ordered 10 BAC 1-11-200s in 1961, followed by a Braniff International Airways order for 6 planes. The 200 series was the initial production variant and a popular one, 56 were built. Subsequent versions were the 300, 400 and 500, which had larger fuel tanks and better rated engines for a longer range. The One Eleven offered a comfortable flight and spacious cabins, and an extremely quick passenger turnaround time with simultaneous embarking and disembarking through its stairs and interior layout. It was ultimately not as successful as the DC-9 and 737-200 but was ordered by several international airlines including Kuwait Airways, Aer Lingus, Central African Airways and Western Airlines. U.S. based airlines, however, were prohibited from ordering the foreign-produced jet by the Civil Aeronautics Board (CAB). N1550 was built as a BAC 1-11-200 series and delivered to Braniff International Airways in October 1965.  It was the 10th of 14 delivered, first painted in the airline's El Dorado Super Jet livery, but soon after decked out in the classic ochre solid color livery for the remainder of its service with Braniff. It was retired in early 1972, then sold to Allegheny Airlines with 8 other 1-11s. N1550 operated with Allegheny for six more years. In July 1978, it overran the Rochester New York runway due to excessive landing speed and was damaged beyond repair. It was scrapped in 1978. MotoArt acquired in it 2022 and created PlaneTags.

The BAC 1-11 is another beloved aircraft, requested often by PlaneTags collectors because it is so iconic, with only 244 produced. Don't miss adding one to your collection or inscribing with a personal message for a creative gift for your favorite aviation enthusiast. Order your BAC 1-11 today.