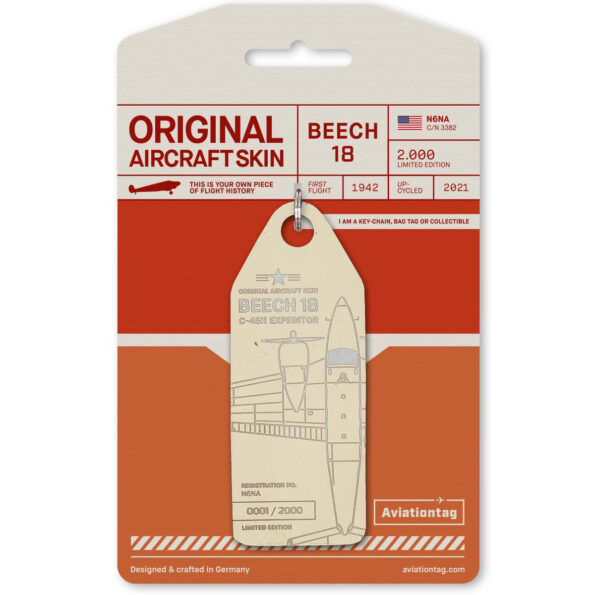 This product was added to our database on Thursday 4 November 2021.

First US Air Force, then NASA, and now Aviationtag!

Our latest limited-edition Aviationtag series is crafted from the fuselage of the historic Beechcraft N6NA. The aircraft has a history spanning almost 80 years and multiple conversions behind it: Built in 1942 for the United States Army Air Force by Beech in Wichita, Kansas as a T-11 model,after just twelve years it was converted into a Beechcraft C-45H.

After a brief stint at an unknown owner, it was then used by NASA from May 1961 under registration N9525Z at the "Jet Propulsion Laboratory", which builds and controls satellites and space probes for NASA. To continue its NASA career, our Beech was fitted with a three-speed transmission by Volpar and moved to NASA's Kennedy Space Center in Florida under its new and final registration N6NA, where it was deployed to measure atmospheric electricity prior to each spacecraft launch.

After the N6NA forming part of the "Manatee County Mosquito Control" team from 1981 to 1999 and spending a year under the ownership of "Milford Aircraft Parts Inc", on 1 June 2000 it changed hands to "A Cargo and Leasing Company LLC" and the trail of this breathtaking plane went cold.

So we are all the more thrilled that this Beech 18 has found its way to us and can now start its new life as an Aviationtag.

Note: If it's a shiny or new-looking tag you're after then this is not the edition to go for. This series shows clear signs of the almost 80 years of service performed by the Beech 18 – each Aviationtag bears the marks of aviation history and has imperfections, scratches and parts where the paint is flaking, but that is what makes each and every tag one-of-a-kind. These imperfections are not a reason that we can accept for claims or complaints.

Every tag is unique. Depending on the plane, tags may vary in terms of haptics, material thickness and colour. Small blemishes bear witness to the plane's long history and are an authentic reminder of its glory days over the clouds. Small scratches, flaky paint and imperfections are totally normal and give our Aviationtags their unique charm – the charm of a vintage product crafted from upcycled materials. These quirks are not the result of the production process, they simply reflect the state of the aircraft material we use when it was extracted.

Bagagetag with KLM on one side and writable backside, including metal wire

Large keyholder with 'Remove Before Flight' on both sides