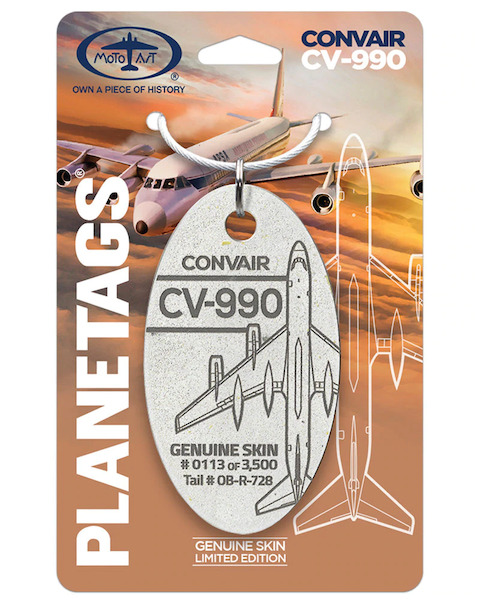 Next to join the fleet is a Convair 990 Coronado, the fifth one ever built and one of 37 produced. MotoArt welcomes OB-R-728 to the PlaneTags family.

The Coronado is a narrow body jet airliner, produced between 1961 and 1963 by the Convair division of General Dynamics. A stretched version of the Convair 880, the 990 was designed to meet an American Airlines request for a plane that could fly from New York to Los Angeles quicker than what was available at the time. Convair guaranteed it could build it, and although it could cruise at faster speeds than its rivals, it did not perform as promised. The CV 990 marked the end of an era for Convair. Our CV-990 was the fifth built and was initially used by Convair for flight test operations. It was later refurbished and sold to Aerolíneas Peruanas S.A. (APSA). OB-R-728 brought the airline into the jet age and the Miami-Lima-Santiago and Miami-Lima-Rio de Janeiro routes were launched. One of APSA's three CV-990s was hijacked and flown to Cuba in 1969, during a spate of hijackings. The airline suffered from financial troubles, as well as fraud allegations and ceased operations in May 1971. Our plane was stored for many years, but notably used during that time by NASA during the early 1980s as parts for its 990s that performed landing tests for shuttle landing gear assemblies, and by FLETC in the 1990s specifically for dealing with hijacked aircraft on the ground. With just 37 total CV-990s ever built, and less than a handful remaining today, preserving the story and portions of '728 was important to MotoArt owner Dave Hall. Celebrate the ingenuity of the designers and engineers who endeavored to create the fastest jet airliner in the sky. Add a Convair 990 Coronado to your collection today.