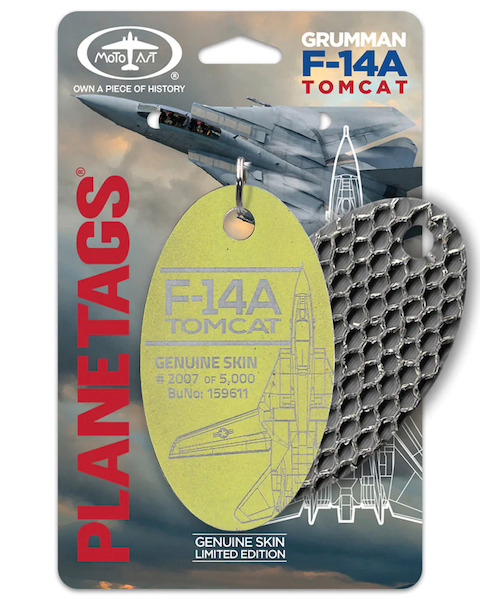 For years there were rumors of a ghost F-14, one that had been written off by the U.S government years ago, never intended to be in foreign - or civilian - hands. This ghost became the Holy Grail for MotoArt owner Dave Hall. Presenting the F-14A Tomcat PlaneTags.

The Grumman F-14 Tomcat is a carrier-based, supersonic fighter designed for fleet air defense, ground attack, and reconnaissance. They served with the U.S. Navy from 1972 to 2006 and were pivotal to the nation's defense. Only 712 were built and 79 of them were bought by Iran before their 1979 revolution. In the years that followed, surplus F14 parts were being sold to Iran, who had since become our adversary. In 2008 President George W. Bush signed the "Stop Arming Iran Act", specifically prohibiting the selling of any F-14 parts. This made the chances of finding an F-14 very slim. Earlier this year, Hall's quest was fulfilled when a colleague invited him to check out some old planes that he was selling. As he showed Hall and the team his collection of cockpits, some of which were used in films and television, one in particular, tucked away in the very back, caught Hall's eye. It was the rumored ghost F-14. Research confirmed that this F-14 was BuNo 159611, which had been struck off charge at Point Mugu in 1994. '611 was demilitarized by pre "Stop Arming Iran Act"/1994 standards and sold for scrapping. Instead, it ended up in storage, occasionally brought out to be used in films like Surface to Air and TV series' like JAG. More recently, it was leased to Paramount Pictures for the filming of Top Gun: Maverick. While the cockpit could not be preserved, both because of its condition and the regulations surrounding it, MotoArt was able to save its original skin and create an incredible heirloom that honors and celebrates the mighty F-14 Tomcat, more specifically BuNo 159611. Add one to your collection today. Keyholder with FOLLOW ME on both sides, yellow background, arrow style

Keyholder with KISS BEFORE FLIGHT on both sides