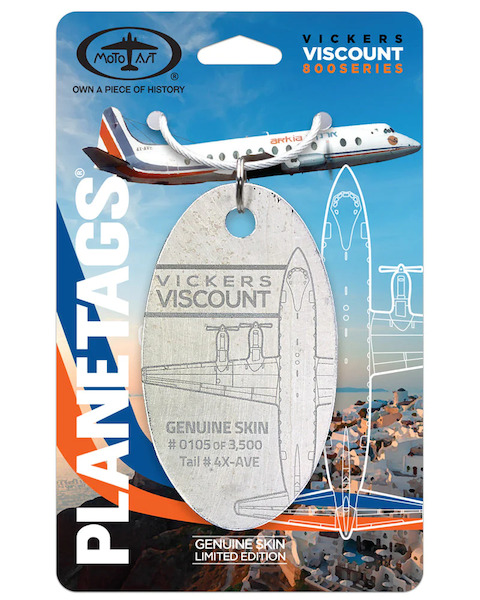 The Viscount was a British medium-range, four-engined turboprop airliner produced by Vickers-Armstrong. Its design was based on requirements for a post-WWII civil aircraft and became one of the most successful post-war commercial aircraft, with significant sales even in North America. The Viscount was the first turboprop airliner to operate passenger service and to offer the first regularly scheduled flights by a turbine-powered aircraft. The revolutionary cabin pressurization provided a quiet, comfortable ride and became a favorite of passengers and airlines alike, and the most popular commercial airliner of its time. 445 were built, 3 of which were v.831, which featured Rolls Royce Dart 525 engines and 60 seats. Our Viscount 831 (C/N 403) was built in 1959 for Airwork Ltd, and first registered as G-APNE. It first flew on March 9, 1959 from Hurn, Bournemouth, Hampshire, England. She spent many of her early years flying for airlines such as British United Airways (BUA), British Overseas Airways Corporation (BOAC), and British Midland Airways (BMA) before finally settling in with Arkia Israel Inland Airlines as 4X-AVE from 1972 to 1982. After retirement, 4X-AVE went on to become a training aircraft for Pima Community College until 1998, before being broken up and salvaged for parts in an Arizona scrap yard. MotoArt recovered 4X-AVE from the desert in 2022. Only the back section was used for PlaneTags. The front cockpit has been preserved in our Mojave boneyard storage in the hopes it will someday find a permanent home as an exhibit. Don't miss adding these limited edition series Vickers Viscount PlaneTags to your collection today. The Viscount is a much requested and beloved aircraft, and its place in history deserves a place in your PlaneTags collection.