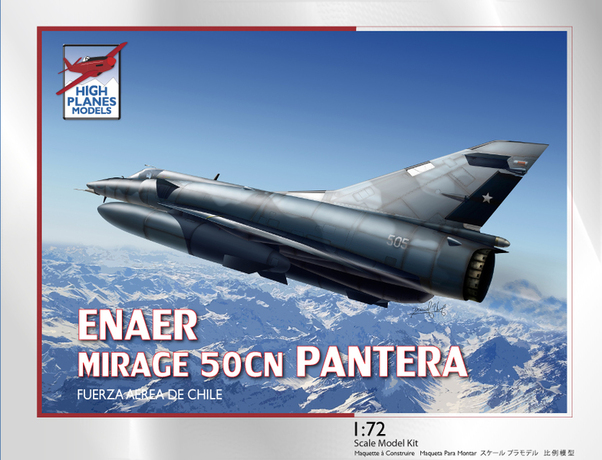 This product was added to our database on Friday 9 January 2015.

The Dassault Mirage is one of the most successful French aircraft designs of the post-war era, and an oustanding third generation jet fighter. The Mirage III prototype first flew in 1956 benefitting greatly from the work done on the experimental Fairey FD-2 Delta. It entered service with the French Air Force in 1961.

Following the experience operating the Mirage IIIC in the Middle East, the Israeli Air Force requested a new version from Dassault that had improved range and payload. This became the Mirage 5 series which proved to be an export success for the company. After using the improved Atar 9K-50 in the Mirage F.1, Dassault built the Mirage 50-01 concept demonstrator. The Fuerza Aérea de Chile, FACh, ordered eight modified to their needs as the Mirage 50 FC and a further six as the Mirage 50C. The difference between the two variants was mainly nose shape as different radars were fitted.

In 1986, the FACh began a modernization program to improve the types performance. With assistance from Israel Aircraft Industries (IAI), the Chilean aviation company Empresa Nacional de Aeronáutica (ENAER) developed an upgrade package that included air to air refuelling capability, new avionics, flares and canards. The first Mirage 50 CN "Pantera", serial 514, was rolled out in 1986. The other airframes were gradually converted to the new standard.

The Pantera served with the Grupo de Aviacion Nş 4 at Punta Arena in southern Chile. The base is strategically located close to the southern shipping lanes through the Straits of Magellan. The unit developed new capability as the upgraded systems meant the advanced Python air to air missiles and Griffin laser guided bombs could be used.

F-16s arrived in 2007 and the Panteras were officially withdrawn in December. Apart from serial 503 which was preserved, the remaining airframes have been stored while the FACh looks for a buyer.

This kit includes two decal options from the FAA, all from Grupo de Aviacion Nş 4, designed by FCM. Additional serials are included for making other examples.
As a bonus, it also includes a short guide to earlier Chilean Mirages showing which alternative parts included in the kit can be used to build a Mirage 50C or a Mirage 50FC