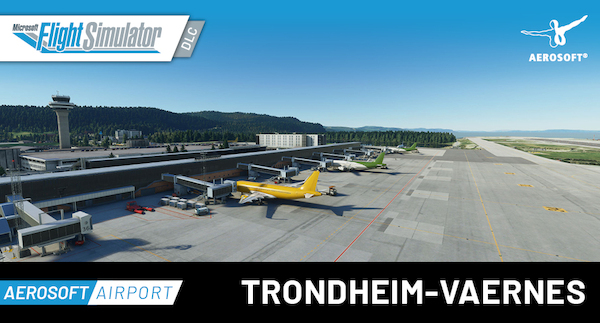 Product information: "Aerosoft Airport Trondheim-Vaernes"
The international Airport Trondheim-Vćrnes, located in Northern-Trřndelag, is the fourth largest airport in Norway with approximately 4,4 million passengers per year. The major hub for the Norwegian Scandinavian Airlines System (SAS) and the Norwegian Widerře airline exists since 1914 and operates the very busy route between Trondheim and Oslo, amongst others.

Vćrnes Church, the oldest preserved stone building in Norway, is located south-east of the Airport. Approaching the airport from the east, it is visible on the left-hand side.

The airport's realistic replica with detailed models of the terminal and other buildings now brings the Norwegian area steeped in history to life in the Microsoft Flight Simulator. Photorealistic building and ground textures as well as numerous lightings and striking landmarks let the airport and its surroundings appear close to reality.

Important notice:
After the product has been purchased, the product can be installed with the obtained serial number via Aerosoft One.
This requires an internet connection and an Aerosoft user account!