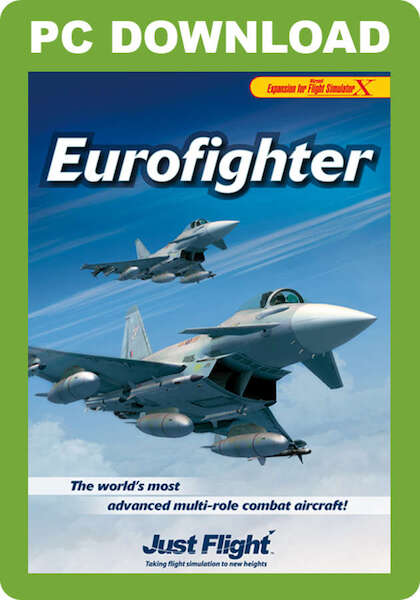 The Eurofighter Typhoon multi-role combat aircraft first entered service in 2004 and over 350 aircraft have since been delivered. The Eurofighter is the result of Europe's largest military collaborative programme and seven nations are now Eurofighter customers. At the start of 2013 the Eurofighter fleet has accumulated more than 160,000 flying hours around the world.

This FSX Eurofighter expansion includes the single-seat Eurofighter Typhoon in thirteen air force liveries including those of the Royal Air Force, Luftwaffe and Italian Air Force. The highly accurate model features the signature delta wing with reverse camber roots, flaperons and foreplanes. Six accurate ordnance load-outs give you the opportunity to experience this swing-role aircraft in its various configurations.

The aircraft features numerous animations including wheel chocks, pre-flight flags, engine covers and a ground power unit. Even the seeker heads on the Paveway and Maverick are animated!

The fully functional virtual cockpit features accurate multi-function displays with a variety of pages for monitoring the aircraft systems, and the collimated and conformal HUD with real-world symbology will provide you with excellent situational awareness.