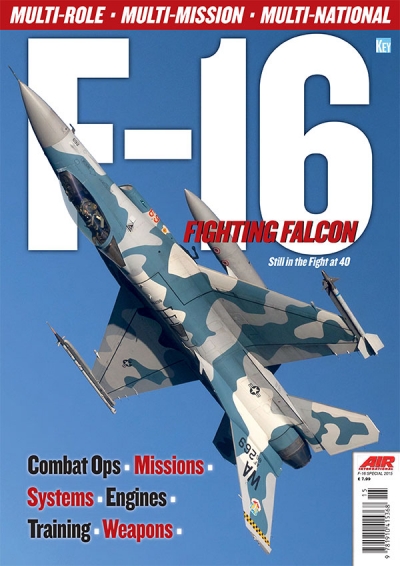 This product was added to our database on Friday 17 july 2015.

The F-16 Fighting Falcon is a multi-role fighter, developed and built in Fort Worth Texas by General Dynamics in the early 1970s and since 1993 by Lockheed Martin Aeronautics.

Operated by 25 air arms around the world, and over 4,600 aircraft built, the F-16 is one of the world's most successful fighters. After 40-plus years of continuous production, the worldwide F-16 fleet dwarfs the combined production runs of the Dassault Rafale, Eurofighter Typhoon, SAAB JAS 39 Gripen, Boeing F/A-18 Hornet and Super Hornet. It remains the original 9G 'off the runway' fighter.

Combat proven in roles that include air defence, air interdiction, close air support and suppression and destruction of enemy air defences, the F-16 remains at the forefront of air force inventories on each and every continent of the world.

This unique 132-page publication written and produced by the team behind AIR International, showcases the jet from its origin, through combat operations, various US Air Force units and the very latest variants including the Block 52+ F-16IQ for Iraq and the Block 60 F-16E Desert Falcon for the United Arab Emirates.