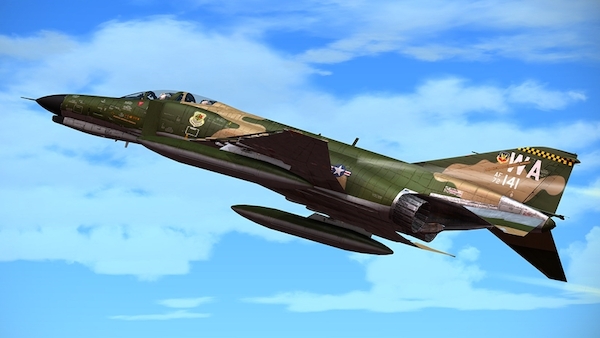 A Definitive Simulation
Utilizing every resource available to us and spending countless hours in design, testing, revising, and more testing again, we're confident that our model represents an extremely true-to-life rendition of the real world aircraft. We've taken great care in presenting an authentic environment for the virtual pilot; closely reproducing the original in looks, systems, sounds and flight modelling.
Attention To Detail

The cockpit of an F-4 represents a busy, complex workplace for the pilot. However, we've strived to perfect the feel of actually sitting in the pilots seat, being able to scan your vital instrumentation with a glance, all replicated with high resolution textures and smooth 3D animation. Being able to run through checklists, flipping all of the needed switches and toggles, monitoring systems as they spring to life. Being able to light the engines and feel the rumble of the massive turbojets behind you. Every bit of it, in your control and command!
Choose Your Loadout

We've included a very large selection of authentic weapons and pods to outfit your F-4 with. Our configuration menu lets you setup and configure your payload any way you wish, allowing you to configure for almost any mission. And of course, adding or removing ordinance or fuel will have an appropriate effect on flight dynamics and handling characteristics.

Important: All weapons in the Standard Edition are completely non-functional with the exception of jettison abilities.
Variety And Possibility

Seeing as the F-4E was the most numerous Phantom variant, with some 1,370 built, as well as the most widely exported Phantom, having seen service with 9 countries outside of the US, there is no shortage of interesting liveries to consider. We've created a large number of extremely detailed liveries for your enjoyment; so many in fact that to lessen the size of the initial product download, we've provided a separate livery pack available for download, completely free. In addition, we're also providing a high quality paint kit for users to create their own liveries.
MVAMS

Our innovative MilViz Aircraft Management System (MVAMS) is included with this release. It allows for easy control and set-up of many aspects of the aircraft, including configuring the default start-up state, control configuration, aircraft behaviour and more. It also allows for easy notification and application of hotfixes as they are released for your aircraft.
Multi-Platform Support

The MilViz F-4E supports a full range of platforms, in a single downloadable installer:

We now offer two optional & additional add-on modules for the MilViz F-4E Phantom II. These separately purchased modules are available to allow you to tailor your F-4E experience to your own liking.

Our TacPack module adds complete integration with the TacPack software available from Vertical Reality Simulations. This allows for simulation of combat activities within Flight Simulator X and Prepar3d and adds full weapon functionality and gunsight integration.

Our Advanced Series F-4E add-on module further extends the simulation fidelity and depth of the F-4E to allow for complete study level use of this very capable and complex aircraft.

TACPACK:
Experience fully operational weapons and closely matched systems fidelity with the TacPack Add-on for the MilViz F-4E Phantom II. (Air to Ground radar is not and will not be fully functional in this product.)