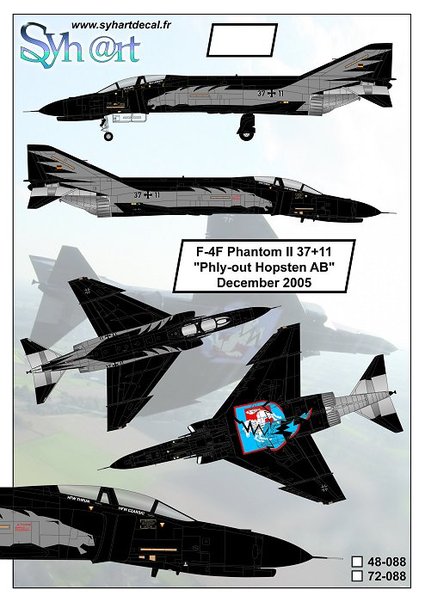 F-4F Phantom II 37+11 "Phly-out Hopsten AB" December 2005 (Syhart Decal 72-088)
€ 8.22
EU: incl. tax € 9.95
Reduced shipping charge may be applicable depending on country of destination and contents of shopping cart. Will be shown before checkout.Add to cart

This product was added to our database on Wednesday 22 June 2016.

Mind: this item is a decal sheet that serves to decorate a scalemodel.ĀThe scalemodel is not included and needs to be ordered separately.

The Rheine-Hopsten airbase in Westfalia (Westfalen), was created from 1938, and during World War II, it was the base of JG-27.
Rebuild from 1959 as NATO airbase, homebase of the Fighter/bomber squadron JBG-36 "Westfalen" from 1961, the badge is designed with a "White horse", on sky blue shield.
Firstly equiped with F-84F Thunderstreak, followed by F-104G Starfighter on 1965, it was finally converted on F-4F Phantom II from 1975.

It's finally for the departure of Phantoms, and for the final closure of Hopsten AB that the F-4F Phantom registered 37+11 received a black paint, with grey horses on sides, and broken squadron badge on bottom.
All Phantoms based on Hopsten were transfered to JG-71 "Richtoffen" on Wittmundhaven. The F-4F Phantom 37+11 received a "tag" on right intake : JG-71 "R"heine

The lasts Luftwaffe actives phantoms was retired by JG-71 "Richtoffen" on Wittmundhaven AB on 29th june 2013, Two last phantoms used for by flight test center was retired one month later by WTD-61 on Manching AB. They received colorful schemes too.(Syhart 078).

This decals set contain all markings to complete this aircraft.
Here is a new edition (screen-print) of Syhart Decal reference 48/72-007 (released on 2005), the decals design has been modified.
Exemple : the bottom badge splited to ease the decals application (missiles & gear bays, doorsģ), as far as masks permitting the choice to complete the sides horses by decals or by paint.