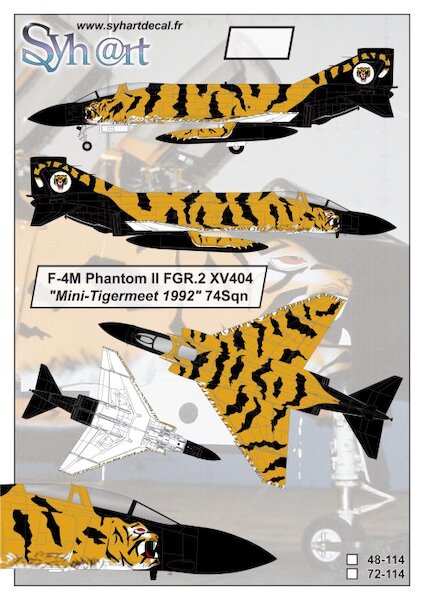 The No 74 (Fighter) Squadron of RAF is one of three founders members of NATO Tigermeet.

On 1984, on RAF Wattisham, Suffolk, the No 74(F) Squadron reformed with arrival of the 15 Phantom F.3s, the ex-US Navy Phantoms, generally referred to as the F-4J(UK), it's the only RAF unit to fly these aircrafts.
These Phantom F.3s were used till 1991, when the squadron was converted with the last Phantom FGR.2, being one of the last RAF unit to fly Phantoms before been converted to Bae Hawk T.1 from october 1992. The squadron was finally been disbanded on 2000

If this Phantom FGR.2 is known as one of two only fully tiger painted phantoms in history
(the other is the german RF-4E 35+76 from AG52 during the Tigermeet'84),

XV404 is also known for its sad end, when it stay for months laid in parts still painted as a tiger, before being simply scrapped.