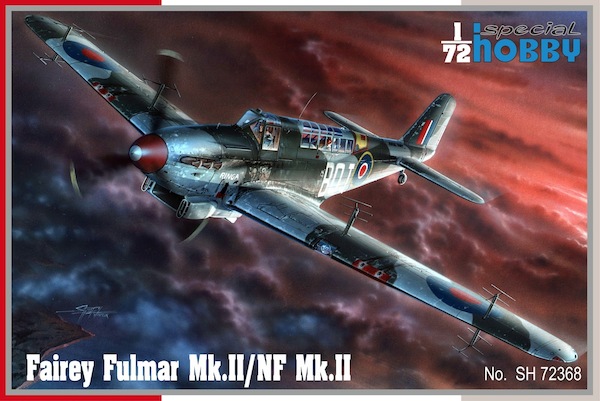 long years of subordination, the British Fleet Air Arm became independent from the RAF. But while still under the RAF, specifications O.8/38 had been issued calling for a naval fighter and reconnaissance aircraft with long range and heavy (by the 1938 standards) armament of eight .303 machine guns. The plane was to carry a crew of two, although the second crew member was not to have a rear-firing weapon, his task was only to navigate over the sea as the pilot, by the Admiralty's opinion, was not able to do so.
The first production machine serialled N1854 was taken aloft for the first time in December 1939. Fulmars of the Mk.I version were fitted with R&R Merlin Mk.VII engines and the production gave a total of 250 airframes, while there were 350 of the Fulmar Mk.II built which featured improved performance and some of them were finished in night fighter version known as the NF Mk.II. These were equipped with uprated R&R Merlin Mk.30 engines, had modified radiator system and other smaller improvements. Heavier armament of four .5 machine guns was also possible.
For a fighter machine, the Fulmar possessed rather low performance, most of all they were rather slow. But in 1940 when they saw military service for the first time, they meant quite a significant leap forward against Skua and Sea Gladiator airplanes and achieved many victories mainly in heavy battles in the Mediterranean. The Fulmar saw action also over the Atlantic, Indian Ocean, Ceylon and elsewhere too. In 1942 the Fulmar became to be gradually replaced by Sea Hurriacane, Seafire and Martler single seat fighters. The night fighter NF Mk.II version kept on serving until 1943 and in 1944 were put out ouf first-line service. In spite of its obsolescence, the Fulmar holds a primacy in being a top scoring British naval fighter aircraft of the Second World War.
Until now, we have offered only the Mk.I version in 1/72 scale although in 1/48 we have covered all Fulmar versions. But we want to change it now and bring you also a small scale Mk.II and NF Mk.II kit. Our model comes on three grey styrene sprues accompanied by one clear sprue, with a set of detailed resin parts and also photo-etches. The decal sheet and full-colour instructon sheet caters for three Mk.II Fulmars: a yellow-tailed machine which took part in Operation Pedestal, an Operation Torch machine with US national markings and a machine from the Indian Ocean. The last of our options is a NF Mk.II plane dubbed "Ringa".