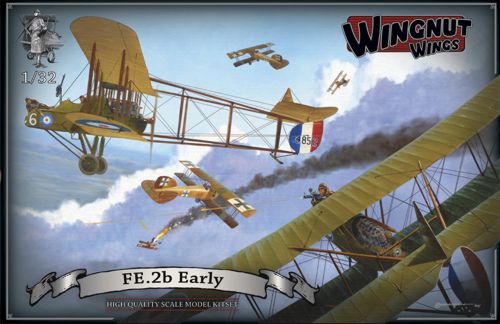 Royal-Aircraft-Factory Fe.2b early version. Released in November 2011 - High quality Cartograf decals with markings for 5 aircraft - 366 high quality injection moulded plastic parts - 12 photo-etch metal detail parts - Highly detailed 32 part 120-160hp Beardmore engine - Optional undercarriage - propellers, wireless, camera, bombs, and guns - Fine in scale rib tape detail - Full rigging diagrams
The RAF FE.2b (The Royal Aircraft Factory Farman Experimental 2b) was a mild update to the FE.2a 'Gun Carrier' which first flew in January 1915. Like other Royal Aircraft Factory designs of the time the FE.2a made good use of many 'off the shelf' components from their other designs, most notably the use of the BE.2c upper wing panels and experimental BE.2 oleo undercarriage with a nose wheel. The first FE.2a differed from the FE.2b in that it was initially powered by a fully cowled 100hp Green engine, featured an airbrake/flap in the top center section, RAF 6 aerofoil section wings and had more ply on the sides of the nacelle. Later FE.2a used a 120hp Austro-Daimler engine (built by Beardmore), dispensed with the airbrake/flap and much of the engine cowling and added a long teardrop shaped gravity petrol tank hung below the top wing. Only 12 FE.2a were built before production was switched to the FE.2b which, apart from streamlining the gravity tank and doing away with even more of the engine cowl, was for all intents and purposes the same. Early in production the wing airfoil section was changed to RAF 14 section and these new wings were retrofitted to older machines. Eventually the meaning of the F in the initials would change from 'Farman', named after the pusher designs of Henry Farman, to 'Fighting'... and fight it did!

Despite its ungainly appearance and large size the FE.2b 'Fee' was an effective two seat fighter, reconnaissance and bomber aircraft which proved to be highly adaptable to the changing face of aerial warfare. Arriving in late 1915 the pusher design afforded the observer/gunner an excellent view and field of fire (something that its contemporaries the BE.2c & e were sorely lacking) enabling the FE.2b, along with the DH.2, to combat the 'Fokker scourge' then decimating the RFC. It also saw service in the escort, reconnaissance, home defense, training and bombing roles and it was in the latter role as a specialized night bomber that it soldiered on until the Armistice. The FE.2b was initially powered by the reliable 120hp Austro Daimler engine built by Beardmore which was later upgraded to deliver 160hp although this proved to be very unreliable at first. The FE.2d, an improved version powered by 250hp & 275hp Rolls Royce Eagle engines, started appearing in June 1916 but only saw limited service and production was halted due to those engines being urgently required elsewhere. Remaining FE.2d airframes then under construction were completed as FE.2bs. A more streamlined 'V' strut undercarriage was tested on an FE.2a and early FE.2b but the shock absorbing oleo undercarriage was preferred, although a modification designed by Lt Trafford Jones of 20 Sqn was introduced from June 1916. Later the 'V' strut undercarriage was reintroduced as it enabled the fitting of a 230lb bomb under the nacelle.