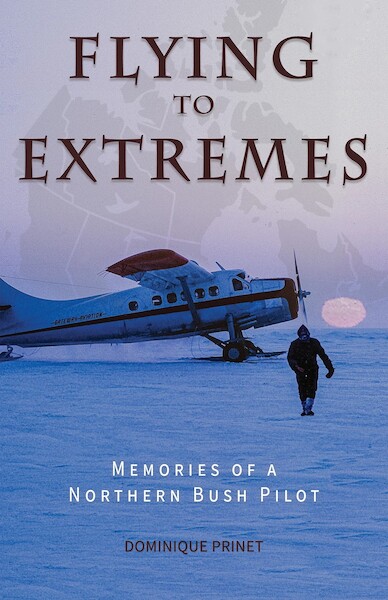 Flying to extremes: Memories of a Northern Bushpilot

Recalling some of most memorable escapades ever conducted in the Canadian Arctic with bush planes, Flying to Extremes takes place in the late '60s and early '70s from a base at Yellowknife, in the heart of the Northwest Territories.

Beyond recounting so many near-mishaps, this book is also about colourful people: the trappers, prospectors, miners, adventurers and gold-ingot thieves who constituted the fauna at the main bar in Yellowknife in those days. For Arctic dreamers, there was always the flight to the Nahanni River, with its Deadman's Valley, hot springs, tales of lost or dead prospectors, the many airplanes crashed in pursuit of gold, and much more Nahanni lore.

This entertaining book recollects Prinet's adventures as a young man while capturing the humour, beauty, danger and unique culture of northern communities, in the dramatic landscape of the Canadian Arctic. Readers familiar with the region and those who can only dream of visiting it will both find this title a nostalgic and captivating read.

In the 1960s, Dominique Prinet worked as a commercial bush pilot in the Canadian Arctic and High Arctic, on floats in the summer and skis in the winter, navigating with an astrocompass since this was long before GPS had been invented. He holds an airline transport pilot licence and has more than 5,000 hours of flying. The stories in this book describe some of the adventures he experienced in northern Canada.

Following classical studies in Paris, he took an electrical engineering degree from UBC and an MBA from McGill, paid for by his intensive flying in the Arctic. He worked as VP for Nordair while teaching microeconomics to MBA students at McGill for about 12 years. He moved to Vancouver in 1988 when asked to join Canadian Airlines as their VP Marketing, then went to Tanzania, in East Africa, to turn around the national airline and manage it for five years under a World Bank project. Dominique has climbed several 12,000-foot peaks in the Alps and the Rockies has crossed the Atlantic in a sailing boat and Nepal on foot, flown around North, Central, and South America in a private single-engine plane, and crossed Africa in a small jeep. Much later in life, at 70, he obtained his private helicopter pilot licence. He spent his retirement years as a sailing instructor and instructor evaluator and has published several books on celestial and coastal navigation.