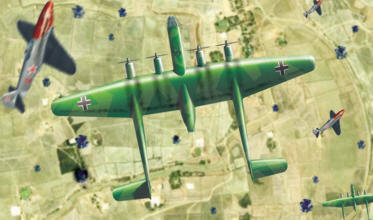 This product was added to our database on Thursday 9 july 2009.

In 1941, the Luftwaffe Fw.200 Condors were constantly shot down by Hawker Hurricane in the Atlantic and North Sea theater. The RLM ordered industries to propose a new machine which could enable to carry more defensive armaments. Focke-Wulf responsed with the P.02310225 very long-range bomber design, later Focke-Wulf internal designated the project Fw.261. The Fw.261 layout featured a central gondola and two separate tail booms, in order to guarantee the rear gunner an unobstructed field of fire. Two pairs of Mk.108 machine gun turrets were installed under the nose to provide extra protection against the British fighter head-on attacks. As well as being a long-range maritime reconnaissance aircraft, the Fw.261 was also intended for the anti-shipping role. As the RLM accepted the improved Fw.200C which featured more powerful engines and increased armaments, the Fw.261 project was not went behind the drawing board.