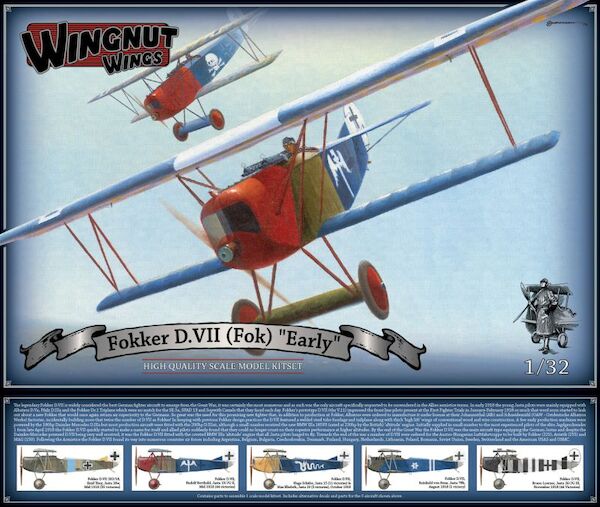 This product was added to our database on Thursday 31 August 2017.

The legendary Fokker D.VII is widely considered the best German fighter aircraft to emerge from the Great War. In early 1918 the young Jasta pilot's aircraft were no match for the SE.5a, SPAD 13 and Sopwith Camels they faced each day. Fokkers prototype D.VII made such a great impression at the First Fighter Trials in January-February 1918 that word soon started to leak out about a new Fokker that
would once again return air superiority to the Germans. So great was the
need for this promising new fighter that, in addition to production at Fokker, Albatros were ordered to manufacture it under license at their Johannisthal (Alb) and Schneidemühl (OAW - Ostdeutsche Albatros Werke) factories, incidentally building more that twice the number of D.VII as Fokker! By the end of the Great War the Fokker D.VII was the main aircraft type equipping the German Jastas. Following the Armistice the Fokker D.VII found its way into numerous countries air forces including Argentina, Belgium, Bulgaria, Czechoslovakia, Denmark, Finland, Hungary , Netherlands, Lithuania, Poland, Romania, Soviet Union, Sw
eden, Switzerland and the American USAS and USMC.