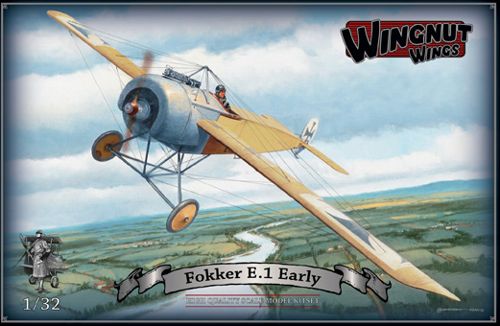 Fokker E.I monoplane. Released on 22 October 2013 - 141 high quality injection moulded parts. 64 all new parts including engine, early production Fokker E.1 fuselage and short span wings - 19 part highly detailed 7 cylinder 80 hp Oberursel U.0 engine - Optional high and low mounted wings - Optional Parabellum LMG 14 and lMG 08 "Spandau" armament - 21 photo-etched metal detail parts - Optional propellers and coamings - Fine in scale rib tape details - Full rigging diagrams.
The legendary Fokker Eindecker, armed with a machine gun synchronized to fire through the propeller, made its 1st official kill on the 1st day of August 1915. It was an 80hp Oberursel U.0 (license built 80hp Gnome) powered wing warping Fokker E.1 13/15 flown by Max Immelmann and marked the beginning of the "Fokker scourge". Inspired by the capture on 18 April 1915 of Roland Garros and his Morane-Saulnier Type L Parasol fitted with a forward firing machine gun (using armoured deflector plates to protect the propeller from 'serious' bullet damage) the Germans set about coming up with their own version. Legendarily, the 25 year old Anthony Fokker created his own interrupter gear in just 48 hours after being inspired by the capture of Garros, but this is undoubtedly a myth. A mechanical interrupter gear had been patented in 1913 by Hans Schneider of LVG but it was not until Fokker perfected it, or a similarly inspired design, that it worked sufficiently well enough to be employed in combat. Lawsuits filed by Schneider against Fokker continued up until September 1933.

Fokker's unarmed 80hp reconnaissance A type Eindeckers (inspired by a successful pre-war wing warping Morane-Saulnier design but with a welded steel tube frame fuselage) provided the airframe for further development and E.1 (armed Eindecker 80hp) types started shipping to front line units in June 1915. Most, if not all, of the 1st half dozen Fokker E.1 manufactured were armed with the Parabellum LMG 14 but this proved to be unsuitable for synchronization and all following Fokker Eindeckers were fitted with the lMG 08 'Spandau'. The Parabellum LMG 14 empty ammo belt was stored externally, initially using an exposed reel on top of the cockpit coaming and then later in a faired container on the left side of the fuselage. All lMG 08 'Spandau' armed E.1 appear to have had an internal empty belt container similar to that found on the 100hp E.II & E.III. Later production E.1 featured extended aluminium fuselage side panels and longer wings giving a wingspan of 10.05m. The ammunition magazine was located externally on the right side of the fuselage, with the exception of a final production run of E.1 manufactured in March - May 1916 which had an internal ammunition magazine. These final production E.1 also featured an additional fuel tank behind the pilot and a wing mounted compass making them all but indistinguishable from late production 100hp E.III (unless the smaller 7 cylinder 80hp engine or associated narrower cockpit coaming is discernable).

The 100hp Oberursel U.1 powered E.II was developed concurrently with the E.1 and started entering service in July 1915 with the E.III and E.IV following later in the year. Early in 1916 the appearance of the highly maneuverable French Neiuport 11 and British Airco DH.2 marked the beginning of the end of the "Fokker scourge" and most Eindeckers had been withdrawn from front line service by December 1916.

Any history here is of necessity very brief so we recommend that you seek out the references mentioned below for a better understanding of the various Fokker Eindeckers, but we do so with the following caution; considerable confusion exists about these important aircraft (in no small part because of incorrect or conflicting Idflieg and Fokker factory records). Because of this we highly recommend you treat published drawings & specifications with a great deal of skepticism. We believe that Josef Scott's 2 new Windsock Datafile Fokker Eindecker Compendiums published in 2012 go a long way towards clearing up much of this confusion.

It appears that Fokker Eindecker steel tube framework and fittings were painted in grey-green while all aluminium panels and cowls remained unpainted and were given a 'squiggly turned' finish. Despite conventional wisdom, photographic evidence indicates that no Fokker Eindeckers were factory finished in Clear Doped Linen (CDL). Contemporary allied combat reports record Fokker Eindecker colours such as "dark brown", "dark brown wings on the upper side", "grey", "straw yellow", "white", "black" and "butcher blue". A French report mentions that "the fabric of the Fokker wings was generally beige in 1916" while capture reports of later production E.III 196/16 and E.III 210/16 simply mention "beige". It is possible that "beige" and "straw yellow" are actually same colour and "white" and "black" may refer to misidentified Pfalz Eindeckers. It would appear that the linen covering was dyed, possibly before being fitted to the aircraft, or colour doped after being attached but before being finished with clear shrinking dope and varnish. Most Fokker Eindeckers exhibit heavy castor oil staining along their fuselages which soaked through the fabric from the inside, considerably darkening the coloured fabric.