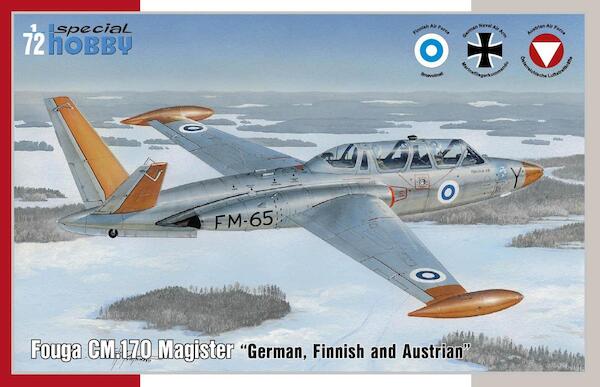 The successful French Fouga CM.170 Magister lightweight jet trainer found its origins in a powered glider design of all-metal construction called the C.M.8.15 which sported a butterfly style tail empennage and was designed by P.Mauboussin and J.Szydlowski. This turbojet-powered glider flew for the first time in 1949 and during development of this design a number of test machines emerged including a unique twin-fuselage aircraft designated as the Gemeaux. The final stage of development of the C.M.8.15 glider led to the CM.170 Magister which was designed to meet an Armée de l“Air specification and like the powered gliders which preceded it this also sported a distinctive butterfly-type empennage.
An initial order for three prototype Magisters was made, the first of which made its maiden flight on 23 July, 1952 and as the performance was found to be acceptable this led to a follow on order for a batch of ten pre production aircraft. As per usual most of the prototype and pre production aircraft were used for testing of various components and improvements which would later be incorporated into full production airframes, the only exception to this was the second prototype which at the request of the military was modified to accept a standard fin and tailplanes. However as the flying characteristics in this configuration were found to be no better, all subsequent machines continued to feature the trademark butterfly tail. As well as serving with the French military the Magister was also an export success for Fouga which sold the type to a multitude of foreign operators and it was even built under licence in three countries. The first licence-built Magisters entered service with the air forces of Germany and Finland in 1958 where they also joined French-built Magisters and the third licence producer of the Magister was Israel, which produced its first aircraft in 1960. The Israeli Magisters were known locally as the Tzukit (or Thrush) and as well as basic training they were also used in the light-attack role where they proved successful during several of the Israeli-Arab conflicts. In the ground attack role the Magister could carry a pair of machine guns fitted in the nose section and various weaponry was mounted under the wings in the form of bombs and unguided rockets.
Within Europe the Magister was flown by France, Belgium, Austria and Ireland but there were also many other operators worldwide in Africa, Asia and South America, many of whom were no doubt attracted by its lightweight design and low operating costs. Among these far flung operators were countries such as Algeria, Bangladesh, Biafra, Brazil, El Salvador, Libya, Morocco, Togo and Uganda. Some Fougas are still flying these days, many of them in civilian hands.

The kit comes on four sprues of grey styrene and one frame with clear parts. A full colour instruction booklet will guide the modeller throughout the build. The marking options offer three schemes. Finnish Magister FM-65 flew in aluminium finish with orange high visibility markings and had the unit's badge of three bird silhouettes over a blue cloud on its forward fuselage. The German option wore fuselage number codes 93-03 and was operated by the Bundesmarine, or German Navy. The machine was painted in camouflage scheme, again with orange hi-vis markings. The final option is that of the Austrian 4D-YT machine, this one similar to the Finnish trainer, again in aluminium overall with hi-vis orange on the nose, wingtips and empennage.