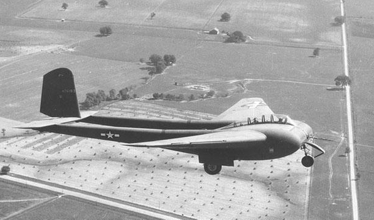 This product was added to our database on Wednesday 27 August 2014.

XCG-16: In February 1942, Bowlus Sailplanes began the design and construction of flying wing glider. It was an intersting departure from the single-fiselage design which had been common to American gliders. A half-size prototype of the glider was completed later that year. Mr. Bowlous organized General Airborne Co., began a campaign to secure a government contract. In November 1943, a contract from Army Air Force was approved. The glider became XCG-16. It was tested and concluded having unsatisfactory performance.
XFG-1: In October 1943, the AAF wished to test the feasibility of extending the range of cargo and bomber-aircraft through the use of a trailing glider carrying fuel. The Cornelius Co developed the glider, which was to test an unusual forward-swept wings aerodynamic configuration. The XFG-1 made its first flight in October 1944. Later that year it crashed. Meanwhile a new test model had been built. However, it was never accepted for productuion.