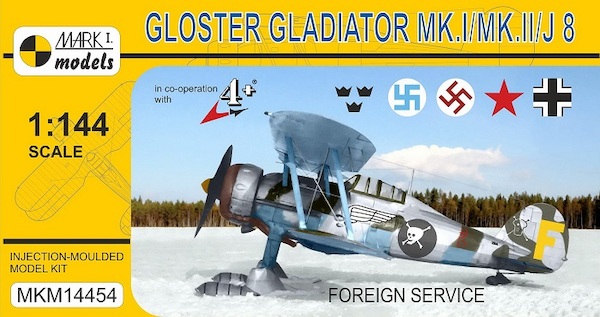 The Gloster Gladiator was a British-built biplane fighter developed from the Gauntlet and its prototype, designated the SS.37, flew in September 1934. The first production model was the Mk.I, which became operational in January 1937. An improved Mk.II version followed in 1938 and eventually 270 aircraft of this Mark were built.
The Gladiator Mk.II was a single-seat biplane of metal construction with mixed metal and fabric covering. It was fitted with a fixed undercarriage and powered by a Mercury radial engine turning three-blade metal propeller. Its armament consisted of four guns, of which two were mounted in the fuselage and two under the lower wings.
The Gladiator was the RAF's last biplane fighter aircraft and the first with an enclosed cockpit. Although rendered obsolete by newer monoplane designs, it proved good in initial combats and saw action in almost all theatres during the WWII.
Gladiators (both the Mk.I and Mk.II versions) were successfully exported to many countries and saw service with more than 15 air arms, including those of Belgium, China, Egypt, Finland, Free France, Greece, Iraq, Ireland, Lithuania, Norway and Portugal. They also equipped RAAF and SAAF squadrons in the Middle East and North Africa.
Latvia took delivery of 26 Gladiator Mk.Is while Sweden flew their 55 planes under military designation J 8 and J 8A. A number of ex-Latvian aircraft were captured by the Soviet Union in the summer of 1940 and yet one year later, some of them were seized by invading German Army and made their way to the Luftwaffe training units.
Colour schemes included in the kit:
1) J 8 (Gloster Gladiator Mk.I), No.235, Black 8-5, Flygflottilj 8 (Wing F 8), Swedish Air Force, Västerĺs airfield, 1937-38
2) J 8A (Gloster Gladiator Mk.II), No.284, Yellow F, Flygflottilj 19 (Swedish Voluntary Wing), Veitsiluoto airfield, Northern Finland, January - March 1940
J 8A (Gloster Gladiator Mk.II), No.284, Yellow F (ex-F 19), Swedish Air Force, Barkarby airfield, late March 1940
3) Gloster Gladiator Mk.I, Black 116, 1st Aviation Regiment, Latvian Air Force, Spilve airfield, 1938-39
Gloster Gladiator Mk.I, Black 116 (ex-Latvian a/c), VVS KA (Air Force of the Red Army), Krustpils airfield, the occupied Latvia, summer 1940
4) Gloster Gladiator Mk.I, NJ+BO (W.Nr. 45829), Erg.Gr.(S) 1, Luftwaffe, Langendiebach airfield, Germany, spring 1942