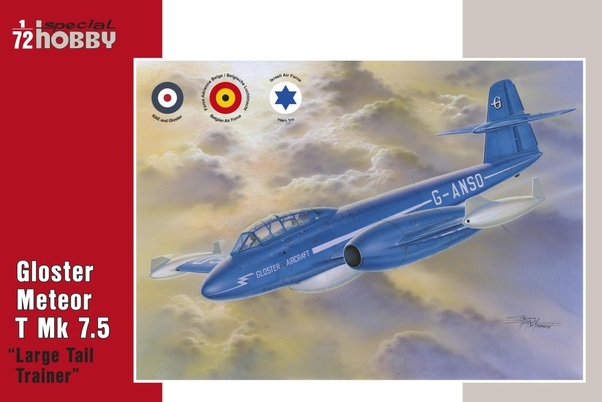 This product was added to our database on Monday 22 December 2014.

Including Belgian, Israeli and UK (Gloster and RAe) Markings

Gloster T Mk.7 trainer aircraft (available under no.72548) was one of the most widespread variants of the Meteor jet fighter aircraft. Only a handful of the Meteor T Mk.7 was equipped with a larger and squared off tail taken from the more modern Mk 8 fighter version. This new trainer variant got some what peculiar designation Meteor T Mk 7.5 (T Mk 7 ? was also used). While these planes were used in Great Britain mainly for various test flights and public shows, in the Belgian and Israeli air forces they served as standard training machines.
The kit contains five frames of plastic parts, three of them in standard greyish styrene, the other two which contain the canopy and recce nose parts are made of clear plastic. The decal sheet offers markings for the Gloster company demonstration aircraft which was blue overall with white coloured stripes and civil registration codes. It was also equipped with non-standard wing-tip fuel tanks. The other British aircraft in this kit is the RAE test machine in dark blue overall and with a non-standard reconnaissance nose. This pair is accompanied by a silver Belgian machine with yellow trimmings and a camouflaged Israeli plane wearing a name on its nose (Ef´eh, ie Viper).

Please note, a standard T7 is also possible with the parts in the box