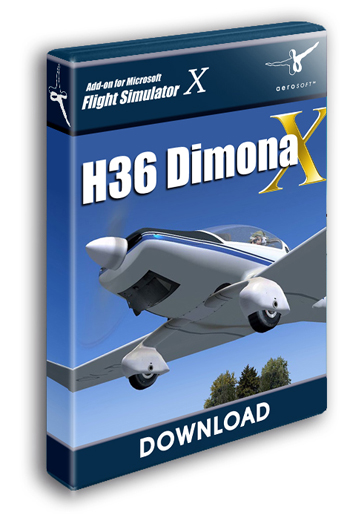 This product was added to our database on Monday 13 March 2017.

Product information "H36 Dimona X" Truth be told, most of them are not brilliant in either capacity but all of them have special characteristics. You will need a few hours to get fully acquainted with the Dimona. But after those hours you will have found a new friend. Because it might not be the best motor aircraft and certainly not the most efficient glider, but it most certainly has character. You will love it quirks and peculiarities as it is truly entertaining to fly. There has never been a high quality motor glider for MS Flight Simulation. And this one is certainly high end. At the base of the product is one of the most detailed flight/engine models ever done for FSX. Accurate down to the altitude you lose in a spin. The aircraft is meticulously modeled and has superb non-standard animations. Though there are not that many systems, those that are included are programmed with great depth. The C4 Flight Computer alone needs dozens of pages in the manuals! Where FSX poses limitations the developers simply did not use the FSX options and programmed their own system. The H36 Dimona is a high end simulation of a special aircraft. Developer Joachim Schweigler flying in the real Dimona: Features: Models / Animations / Sounds: Three different versions. Glider equipped, CVFR equipped and simple. Cockpit shakes on ground roll, stall, sideslip and due to engine vibrations. Very detailed visual model of a used aircraft. Fully functional Virtual cockpit (only 2d panel for the GPS). Dynamic wing flex that reacts on g-force (Not comparable to standard wing flex system). Flight / Engine modeling: Very accurate flight model allowing slip and spins. Realistic windmill start-up possible. Engine damage due to over speeding or overheating. Engine will "diesel" on shut down when hot. Custom calculated values for oil temperature and cylinder head temperature. Cylinder head temperature dependent on cowl flap position. Wind milling propeller produces drag, which reduces gliding performance, and helps during landing. Choke has effect on engine roughness when cold and drowns engine when warmed up. Systems / Avionics: Dynamic overstress prevention system (ailerons up). Custom propeller animations of blade pitch and slow RPM's: Takes a realistic 1m 20s from full fine to full feather. Engine compression noticeable on prop movement. Propeller stopping position affected by airspeed and side slip. Custom electrical fuel pump. All circuit breakers are functional. Circuit breakers for COM, NAV and Transponder might trip if they are on during engine start. Accurate function of parking brake system. SDI C4 competition glider computer and audible variometer with realistic total energy compensation. Accurate simulation of the MT propeller control unit: Uses an electric motor to control blade pitch, requiring that electrical power is available for the unit. If the circuit breaker is switched off in start position, You might over speed the engine. Auto position for constant speed control. Glide position for feathering the propeller blades. Rotary knob for RPM adjustment. Custom transponder. Custom GPS: Monochrome LCD look. Free positioning. Setup page for selection of what to show on the GPS map. Accepts FSX flight plans when loaded from the FSX flight plan menu page. Direct-To function. NRST station Airport, VOR, NDB and fixes can be selected for Direct-To's. Cursor mode where you can select any position on the map as a Direct-To. HSI page showing ground track, flight plan leg bearing and cross track deviation. Custom old style VOR. Compass that really floats in fluid. Instruments needles react on vibrations and aero dynamical influences. Aerosoft sound module with over 150 sounds for all controls and for: Switch and lever sounds. Special engine sounds. Wind sounds for side slip and windows. MT-propeller electric motor. Load save module: Automatically saves panel state and fuel quantity when aircraft is standing still on the ground with engine off. High quality sound set recorded in and from the real aircraft in flight and on the ground. Automatic warning signs in the VC if the user sets up FSX wrong. Smashed insects appear on the windscreen and leading edge of the wings (only during summer - can be cleaned on the ground). Automatically loads panel state when the aircraft is loaded / reloaded. Extensive documentation, including original checklist and specially formatted checklists for smartphones. Light on framerate. No online activation needed, does personalize the installed files. Conclusion by simFlight.com: "A very nice step for glider pilots that want to get into motor aircraft, or the other way around, Aerosofts Dimona X is way more than just a step in between. It’s a unique, very detailed product that will keep you happily occupied for hours, exploring this new way of flying, exploring it’s features, and learning to live with its quirks. The Dimona X doesn’t stand out because of just one or two top features. Instead, it stands out because the entire package is rock solid and well balanced. I gladly recommend this product to anyone that likes small GA aircraft, gliders, or just wants something new to try." System requirements: Microsoft Flight Simulator X (SP2, Acceleration Pack or Gold Edition) Windows XP / Vista / Windows 7 with the latest Service Packs Intel Core 2 Duo CPU (2 x 2666 MHz) or equivalent (Core 2 Quad CPU recommended) 2 GB RAM DX9 Graphic Card with at least 512 MB Mouse with mouse wheel Joystick with throttle and rudder highly recommended Download-Size: 190 MB Installation-Size: 450 MB