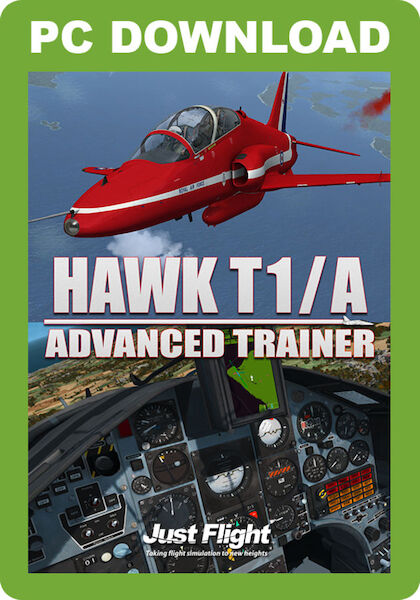 This product was added to our database on Tuesday 20 December 2016.

Following on from their award-winning Canberra PR9 and L-1011 Tristar professional, and the recently released Tornado GR1, this highly detailed simulation of the BAe Hawk T1 for FSX, FSX: Steam Edition and Prepar3D has been developed by Just Flight's in-house development team after hands-on research with a real-life ex-RAF and ETPS Hawk T1.

The Hawk T1 is a British-built single engine jet trainer with a two-man tandem cockpit. First flown in 1974, the Hawk has served as an advanced training aircraft for nearly 40 years. The design has proved to be highly successful, with over 900 examples of more than 10 variants sold to air forces in 18 countries, including the UK, Finland, India and Saudi Arabia.

The Hawk T1 variant, first delivered to the RAF in 1976, continues to serve as an advanced jet and weapons trainer. Possibly the most well-known Hawk T1s are those flown by the world famous RAF Red Arrows display team, which has been flying the Hawk T1 since 1979.

The Just Flight Hawk T1 has been modelled to an exceptional level of detail and features a variety of 4096x4096 paint schemes (including the RAF and Red Arrows), realistic payloads (including the AIM-9L Sidewinder, 30mm ADEN cannon gun pod and Red Arrows diesel/dye smoke pod) and ground equipment. Both the front and rear pilot positions are included and the aircraft features a truly 3D virtual cockpit with smoothly animated 3D instruments and fully functioning custom-coded systems and avionics.
Detailed Description

A Paint Kit (174MB) is available to download here.