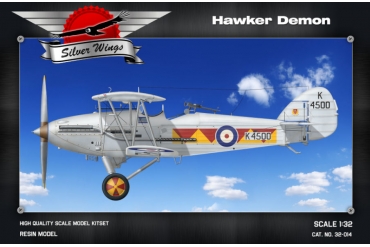 This product was added to our database on Thursday 23 January 2014.

On entering service in 1930, Sydney Camm’s Hawker Hart bomber proved so much quicker than the RAF’s existing fighters that the potential for a fighter version of the newcomer was self-evident and developed without delay. Following initial evaluation of two prototypes at RAF Martlesham Heath, a batch of six Hart Fighters was duly completed in 1931 and placed for development with No.23 Squadron at RAF Kenley.

The adaptation was considered successful and in 1932 a contract was raised for the manufacture of an initial run of 17 such aircraft. At first the new aircraft was known as the Hart Fighter, being renamed the Demon in July 1932. The aircraft was ordered into full production, entering full service in 1933. In all 305 Demons were produced, 232 of them for the RAF.

Due to pressure of work at the H G Hawker Engineering Company, production of the last 59 Demons was subcontracted to Boulton-Paul Aircraft. In their time, Demons equipped six regular RAF and five Royal Auxiliary Air Force squadrons and saw service in the Abyssinia crisis of 1935.

As a fighter with the RAF the Demon was finally superseded from late 1938 by the Blenheim IF, but a few were used as target tugs until replaced by the Hawker Henley.