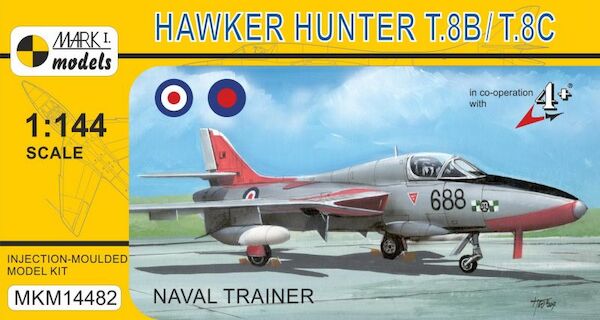 Revell parts with new Sprue for twoseater fuselage
The Hawker Hunter was a British jet fighter developed during the late 1940s and its prototype, the P.1067, was flown in July 1951. Succeeding first-generation jet fighters such as the Meteor and Venom, the first Hunters were introduced into service in the mid-1950s.
For pilot training a two-seat variant was developed for the RAF, designated the T Mk.7 and flying in late 1957. The Hunter T Mk.8 was its Royal Navy equivalent but fitted with an arrestor hook for use on airfields. Ten were new builds and 18 conversions from F Mk.4s, all made in the period 1958-59. The T Mk.8B and T Mk.8Cs followed (conversions from F Mk.4 and T Mk.8s), with improved navigational equipment, used for Buccaneer conversion training (both by the RN and RAF), while a handful of aircraft were further upgraded to T Mk.8Ms to train Sea Harrier pilots.
The Hunter T Mk.8 was a two-seat swept wing all-metal monoplane aircraft powered by a R-R Avon turbojet. The pilots were seated side-by-side in the nose section. It featured two wing-root intakes, single jet pipe, upward-opened canopy, ejection seats and tail-mounted brake parachute. The on-board armament of the two-seat Hunter Mark 8 was reduced to one Aden cannon semi-buried in the starboard fuselage undersurface, while up to four drop tanks could be carried beneath the wings.
The Hunter was one of the RAF's mainstays from the mid-1950s through the sixties. It became a popular machine in foreign service, being exported to many countries worldwide. Two-seat variants remained in use for training and secondary roles with the RAF and the Royal Navy until the early 1990s.
Colour schemes included in the kit:
1) Hawker Hunter T Mk.8B, XF991/LM, Black 688, No.764 NAS, RN, RNAS Lossiemouth (HMS Fulmar), Moray, U.K., July 1969 - July 1972
2) Hawker Hunter T Mk.8B, XF995, No.237 OCU (Operational Conversion Unit), RAF,
Honington Air Base, Suffolk, U.K., 1980
3) Hawker Hunter T Mk.8C, XF994/VL, Black 873, Fleet Requirements and Air Direction Unit (FRADU), RN, RNAS Yeovilton (HMS Heron), Somerset, U.K., May 1987 - May 1995
4) Hawker Hunter T Mk.8C, XL580, White VL, 'Admiral's Barge' (Flag Officer Flying Training personal aircraft), RN, RNAS Yeovilton (HMS Heron), Somerset, U.K., 1969


This injection-moulded kit contains 35 parts (moulded in grey plastic) and one clear part (the cockpit canopy). A comprehensive instruction leaflet and a decal sheet are included.