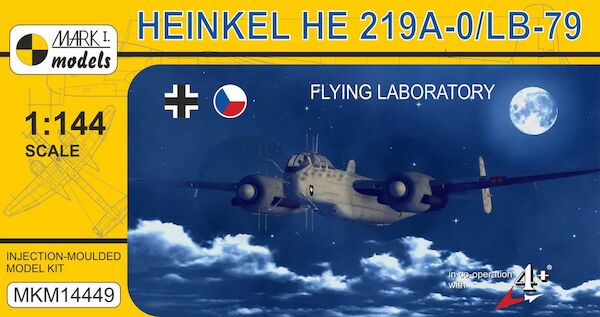 The He 219 Uhu was a German heavy night fighter, employing a number of the then novel radar and antennae equipment, and was the first operational military aircraft to be fitted with ejection seats. After protracted development the prototype flew in November 1942. The first fighter variant to be delivered was the He 219A-0, which was actually identical to the 'A-2'. It was equipped with four cannons in the ventral tray and two guns in the wings. The He 219A-5 was the first major production version, being similar to the previous 'A-2' model but with an extended range, while the final variant was the He 219A-7, fitted with improved engines. The He 219 was a two-seat, all-metal monoplane powered by two Daimler-Benz DB 603 in-line piston engines.
Nearly 300 of all the He 219 models were built and although the type proved to be a capable fighter, it saw only limited service; had they been available in quantity, they might have had a significant effect on the strategic night bombing offensive of the Allied forces carried in the latter half of the war. After the war, a few aeroplanes were test flown by the Czechoslovak Air Force; however, their service was limited and short-lived.
Colour schemes included in the kit:
1) He 219A-0, DV+DL (W.Nr. 190116), Luftwaffe, Werneuchen airfield, Germany, summer 1944
2) He 219A-0, DV+DI, Black 113 (W.Nr. 190113), Luftwaffe, Rechlin-Lärz Air Base, Germany, 1943-44
3) He 219A-0/R6, G9+FK (W.Nr. 190012), 2./NJG 1, Luftwaffe, Venlo-Herongen airfield, the Netherlands, April 1944
4) LB-79 (He 219A-5), Black 32, LVÚ Aviation Research Institute, serving with 2nd Sq., 51st Air Regiment, Czechoslovak Air Force, Plze?-Bory airfield, Czechoslovakia, early 1952

This injection-moulded kit contains 35 parts, one clear part (the cockpit canopy) and a small fret with 41 photo-etched parts. For modeller's convenience a display base, made of pasteboard card, depicting a section of the Luftwaffe military airfield is added. A comprehensive instruction leaflet and a decal sheet are included.