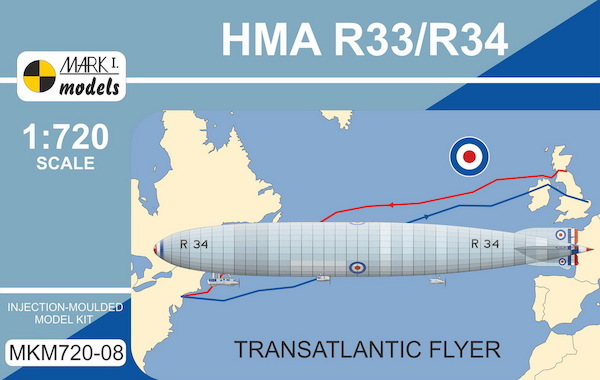 Rigid airships were produced and relatively successfully employed in the period from the early 1900s to the end of the 1930s. The real technology trailblazer in this field was the Zeppelin company, of Imperial Germany, which built nearly one hundred military airships. British rigid airship designs lagged behind German developments, although a handful of ships were locally evolved and built.
Both the R33 and R34 were almost identical copies of the Zeppelin LZ76, which had been brought down intact onto the English soil in September 1916.
The R33 was built by Armstrong Whitworth and first flown in March 1919. By far Britain's most successful rigid, it went on to serve successfully for ten years. It was used for experiments in connection with the design of the R101 airship and also for trials launching of parasite fighters. It was known as "Pulham PigËť.
Her sister ship, the R34, was constructed by Beardmore and also made her first flight in March 1919. She became the first aircraft to make an east to west transatlantic flight in July 1919 and by the return flight it completed successfully the first ever two-way crossing. The crew nicknamed her "TinyËť.

This injection-moulded kit contains 35 parts, including a useful model stand.
A comprehensive instruction leaflet and a decal sheet are included.