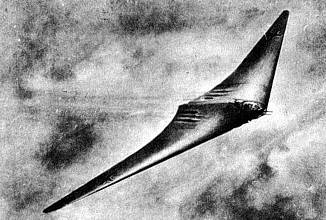 n early 1930s, Horten brothers had interested in the flying-wing design as a method of improving the performance of airplane. Several Horten flying-wing gliders were built and tested. In 1943, Reichsmarschall Goring issued a request for the design proposals to produce a fighter/bomber that called 3x1000 project. Horten submitted the Ho.IX flying-wing jet fighter design. Goring believed in the design and ordered 40 production aircrafts. In 1944, RLM issued a requirement for a bomber able to fly from Germany to New York and back without refueling. Goring asked Horten to make a presentation for their Amerika Bomber. Horten proposed six jet-engines Ho.XVIII flying-wing bomber that was the scaled-up Ho.IX design. In early 1945, Ho.XVIII was approved to build in Junkers plant. Horten were told to work with the Junkers and Messerschmitt engineers. However, the engineers committee was unwilling to go with the Horten's design, and changed its configuration. Horten brothers unaccepted with the modification and left the committee. They redesigned the Ho.XVIIIb bomber but the end of the war came with no progress.