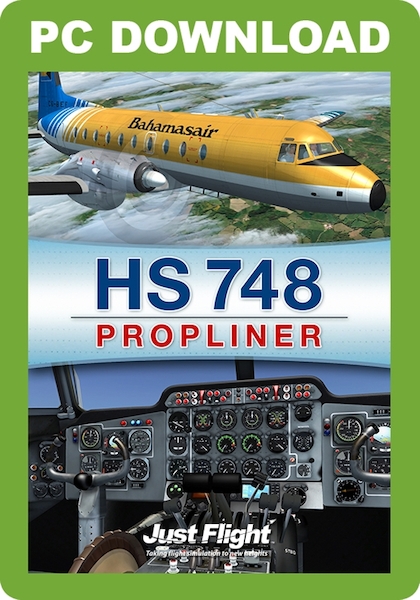 This product was added to our database on Monday 11 September 2017.

HS 748 Propliner for FSX and P3D includes the Series 2A variant in 16 liveries. The detailed virtual cockpit features 3D instruments, a comprehensive avionics suite including a GNS 430 and a realistic, easy-to-use autopilot with pitch and bank hold.

In the late 1950s, the search was already on for a worthwhile replacement for the Douglas DC-3; with the introduction of the turboprop engine, the venerable 'Dakota' was no longer economically viable in the eyes of many short-haul operators.

The Vickers Viscount was already performing well in the short-haul market and had attracted buyers from all over the world, and the Fokker F-27 'Friendship' was a proven twin-engine design with a high-wing configuration. Avro, the original company responsible for the development of the 748, had indications from potential customers that a sturdier, low-wing concept would be more acceptable, especially for rugged conditions. Avro planned the 748 as a low-wing, high-lift design with the same Rolls-Royce Dart engines as the Fokker, mounted in self-contained pod-like nacelle structures which also carried extremely strong landing gear. Ground clearance was excellent and the aircraft was proven to be able to haul payloads in excess of 10,000lb, operating out of remote short-strip airfields with little or no support services.

The first 748 flew on the 24th June 1960 and, as Avro became engulfed in the Hawker Siddeley Group, the Series 1 aircraft became known as the HS 748. The Series 2A (the subject of this simulation) was given more powerful RR Darts and an optional large forward cargo door.

By the time the last 748 rolled off the production line, 380 airframes had been constructed. So popular was the success of the design in STOL and short-haul operations that many are still flying around the world today.

Cockpit:
3D cockpit with virtually all of the hundreds of switches, knobs and levers animated and functional. Many gauges are modelled in 3D for smooth operation.
Cockpit textures feature wear and tear to produce an authentic environment
Cockpit lighting with atmospheric instrument backlighting
Special 'baked' textures have been used to present a well-used look and feel to the cockpit area and controls
GNS 430 GPS unit included for easy navigation
Avionics include autopilot functionality from the operating period with NAV and ILS approaches, VOR and ADF receivers and displays, transponder and a full communications suite
Many features have been added to help with usability such as switches to hide the control yokes for a better view of the instruments and pre-set angled views for the overhead panel, throttle quadrant and radios
Numerous warning annunciators will illuminate on fault detection and a fully functional engine fire warning and protection/extinguishing system are built into the cockpit
Electrical systems have been authentically simulated to enable correct APU and engine starts
Realistic 'cold & dark' cockpit starts are possible
Custom-coded autopilot with pitch and bank hold and independent flight director

Liveries:
The HS 748 is supplied in the following paint schemes:

Other features:
Realistic and accurate flight dynamics based on real-world performance and handling data
The distinctive Rolls-Royce Dart engines have been captured to give the utmost realism in full stereo along with switch click and knob effect sounds
Comprehensive PDF manual with panel guide and flight tutorial
A professional standard Paint Kit (194MB) is available so you can create your own liveries