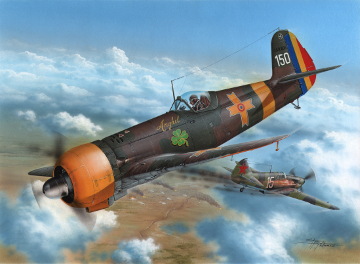 This product was added to our database on Tuesday 12 December 2017.

History:
During the early 1930's the Rumanian Air Force adopted the Polish PZL P.11 and similar P.24, both being considered modern designs at the time. These PZL designs were produced under licence by Industria Aeronautica Romana (IAR). By the mid to late 1930's it was clear that war clouds were looming, and that both the P.11 and P.24 were already nearing obsolescence. In 1937 IAR undertook the design of more modern all-metal, low-wing design featuring retractable undercarriage, but retaining much of the P.24's rear fuselage structure. This was named the IAR-80, and was to be powered by a German Junkers Jumo engine. Never delivered, the Jumo was replaced by the IAR 14K-IIc32 fourteen-cylinder, double-row radial, delivering 870-hp. Maiden flight occurred on April 4th, 1939. The new fighter’s performance approached that of contemporary foreign designs like the Hurricane, P-36, MS 406 and BF 109D.
Various changes to weapons led to the IAR-80A, B and C sub-versions, and also the IAR-81C which was designed for fighter-bomber role during spring of 1941, although it served in both air interceptor and ground attack roles. The IAR-80A was produced in four different batches (51 to 75, 76 to 90, 106 to 150 and 176 to 180). Total production for IAR-80/81 series totalled around 450 units (90 for IAR-80A), but ceased after the American bombing of Brasov factory, on April 16th, 1944.

Fifty IAR-80's were in service during the attack against Soviet Union, on June 22nd, 1941. 6th Group (61st and 62nd squadrons) and 8th Group (41st and 60th Squadrons) were engaged around Stalingrad front during the autumn of 1942. August 1st, 1943 saw IAR-80 & 81's defending the Ploiesti oil plants from attack by USAAF B-24 Liberators, during ‘Operation Tidal Wave’, when the Rumanian fighters downed some of the heavy bombers. IAR-80As were removed from frontline duties and transferred to fighter schools, or were upgraded to IAR-80M standard with the installation of Mauser cannons.

Rumania joined the Allied powers in August 1944, and changed back the national insignia worn by its aircraft from crosses to traditional blue, yellow and red roundels.