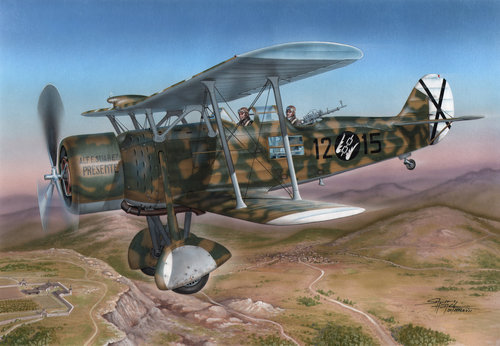 (ex Classic Airframe)
In the early 1930s, the Italian Regia Aeronautica operated IMAM Ro.1 (licence-built Fokker C.V) reconnaissance and observation biplanes. The military were quite happy with the type, however when IMAM offered a new biplane type designed by Giovanni Galasso, the decision was taken to acquire the new type. Following the prototype's successful test flights, the production was commenced in 1934. The Ro.37 was powered by an in-line Fiat A.30 engine, but the Italian military also showed interest for a version fitted with a Piaggio P.IX radial engine. This version was known as the Ro.37bis and was produced along the in-line engined type. The Ro.37 and 37bis became the main observation and reconnaissance types of the Regia Aeronautica and were kept in service until Italy surrendered on 25 August 1943. By this time, a total of 621 machines of both versions had been produced, 325 of which were the bis version. The very first time the type saw combat action was during the Italian attack on Abyssinia (Ethiopia). They also fought in the Spanish Civil War, operated both by the Aviazione Legionaria and by the Aviación Nacional. Following the outbreak of the Second World War, the type saw service everywhere the Regia Aeronautica were fighting, except for the Eastern Front and the English Channel. By the time Italy became involved in the war, the Regia Aeronautica had had 483 of both versions, 200 of which were the bis, but only about a hundred of machines were in fact in airworthy condition. They saw service over the Balkans, Northern Africa and mainland Italy too.
As the type possessed rather satisfactory performance and also because of the fact that two different powerplants were possible for the airframe to be fitted with, both the types were successfully offered to users abroad. In Europe, the type was flown with the Royal Hungarian Air Force as well as in Austria and in Spain by the Nationalists. The bis version was also seen outside Europe, flying with the military of Afghanistan, Paraguay and Ecuador.
Special Hobby's Ro.37bis model kit has been laid out to as many as six sprues of grey styrene and one of clear canopy parts. The styrene items are accompanied by a whole bunch of resin and photo-etched details. The decal sheet offers markings for four eye-catching schemes which portrays machines in service almost throughout the world. A Grupo 4-G-12 option of the Nationalist forces is adorned with a titling to remind a killed comrade-in-arms. One of the Italian machines offered in the kit is an aircraft flying from bases in Albania in 1940 during the Italian attack on Grece, the other Italian machine displays camouflage and markings of the Aviazione Cobelligerante Italiana (Italian Co-Belligerent Air Force), this being one of the last Ro.37s to see active duty. It wore inscription Cocco Bello on the cowling panel. The final option of the Ro.37bis kit wears markings of the Uruguayan Air Force and fuselage code B1-102.