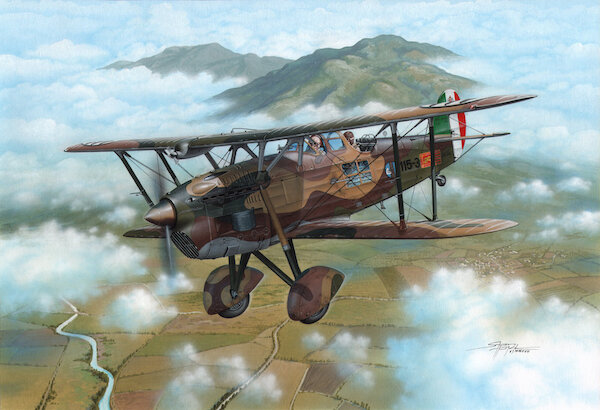 This product was added to our database on Saturday 3 february 2018.

In the early 1930s, the Italian Regia Aeronautica operated IMAM Ro.1 (licence-built Fokker C.V) reconnaissance and observation biplanes. The military were quite happy with the type, however when IMAM offered a new biplane type designed by Giovanni Galasso, the decision was taken to acquire this new aircraft. Following the prototype's successful test flights, the production was commenced in 1934. The Ro.37 was powered by an in-line Fiat A.30 engine. The Italian military also showed interest for a version fitted with a Piaggio P.IX radial engine. This version was known as the Ro.37bis and was produced along the inline-engined type. The Ro.37 and 37bis became the main observation and reconnaissance types of the Regia Aeronautica and were kept in service until Italy surrendered on 25 August 1943. By this time, a total of 621 machines of both versions had been produced, 325 of which were the bis version. The very first time the type saw combat action was during the Italian attack on Abyssinia (Ethiopia). They also fought in the Spanish Civil War, operated both by the Aviazione Legionaria and by the Aviación Nacional.
Following the outbreak of the Second World War, the type saw service everywhere the Regia Aeronautica were fighting, except for the Eastern Front and across the English Channel. By the time Italy became involved in the war, the Regia Aeronautica had had 483 of both versions, 200 of which were the bis, but only about a hundred of machines were in fact in air worthy conditions. They saw service over the Balkans, Northern Africa and mainland Italy too.
Because of its sufficient performance and the option to carry various power plants, the type was exported successfully. In Europe, it saw service with the military of Hungary, Austria and Nationalist Spain.

Special hobby's Ro.37 "A30 engine" kit comes on as many as six trees of grey styrene and one with clear parts. The styrene parts are accompanied by nicely detailed resin parts and a photo-etched fret. The decal sheet offers four interesting camouflage options covering service of the in-line engined version in Italy and abroad. camouflage scheme option A portrays an Italian machine in pre-war colour scheme which is also adorned with Venice flag with the Lion of St.Mark. The Austrian option, camouflage scheme B, had the same camouflage scheme. Camouflage scheme C brings a machine which saw service on Greek front, being operated by the Regia Aeronautica and wearing a scheme of sand with green mottles. The final option, scheme D, is also an Italian machine, this one wearing creme overall and a unit's badge on the fuselage sides as being used during Italian attack on Abyssinia. This machine of an early series was produced by OFM-Aeroplani Romeo and is interesting by having two oil coolers on either side of the nose and a wooden propeller, while standard production machines had only one cooler and a metal prop. In this model, both the coolers and the wooden propeller have been 3D-designed and exquisitely cast from resin