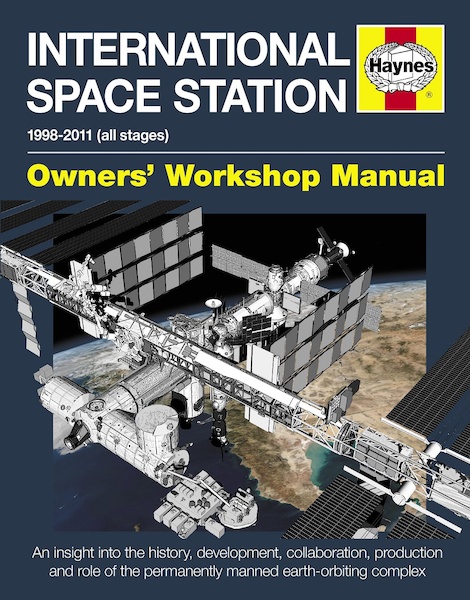 The International Space Station (ISS) is a permanently manned earth-orbiting complex where astronauts carry out research into a wide range of scientific activities. It comprises modules built in the USA, Russia, Europe, Japan and Canada. Author David Baker examines how the ISS was built, the logistics modules and freighters operated by its user nations, how the ISS works as an integrated facility, life on board, what the ISS does, the research carried out and who benefits.

The International Space Station Manual takes the reader behind the scenes of the design, construction, evolution and operation of a remarkable feat of engineering and international cooperation. With a total mass of around 450 metric tonnes and a width of more than 350ft (108m), the International Space Station is the biggest structure ever placed in orbit around the Earth. It took 13 years to build, using the combined resources of 15 countries, together with the skill and expertise accumulated in more than 40 years of space exploration.

The ISS is the world's first truly international space-based laboratory, providing research facilities for scientists, engineers and entrepreneurs in government, industry and in the privately owned commercial sector. Dedicated to non-military activities,

The ISS will be around until at least the next decade, and the partners (USA, Russia, Japan, Europe and Canada) are pledged to continue providing those facilities for a sustained programme of research and discovery involving new medicines, better semiconductor materials, more efficient ways of making exotic metals, and carrying out research in areas where new knowledge is being gathered every day. As an inspiration for school children and students everywhere, it has value for the next generation of scientists and engineers, physicians and geographers, and astronomers and chemists.

The Haynes International Space Station Manual explores the way this massive complex emerged from the competition of the Cold War into a new Space Age of cooperation. It provides a historical background to the origin, design and development of the ISS, using original drawings and images charting the way in which it was built on Earth and assembled in orbit.

With more than 300 images and technical illustrations, the authoritative text of the International Space Station Manual provides a full and extensive description of mankind's biggest engineering achievement of the Space Age, an endeavour likely to last for several decades to come.

A permanent place in space - an insight into the Russian Mir space station, which preceded the International Space Station, and paved the way for international cooperation on a space station project.
ISS Phase I - a chronological look at the NASA and Russian mission to the Mir space station that prepared the way for the assembly of the ISS, involving astronauts from several different countries.
ISS Phase II - the assembly of the ISS to build a space station fit for human habitation, again followed via a chronological examination of the missions to the station and the purpose and achievements of each mission.
ISS Phase III - permanent habitation of the ISS, as Americans, Europeans, Canadians and Japanese began to live together in space, having learned how to work together on Earth.
ISS Phase IV - the final assembly of the ISS, and the delays involved due to the grounding of the Space Shuttle - the only vehicle capable of transporting big loads into space - after the loss of Columbia in 2003.
The legacy of the ISS - with assembly complete, the ISS became a giant laboratory in space, available to the international scientific community for a wide range of research, crew and cargo transported to and from the ISS by commercial companies after the retirement of the Shuttle.

Author: Dr David Baker worked with NASA on the Gemini, Apollo and Shuttle programmes between 1965 and 1990. He has written more than 80 books on spaceflight technology and is the former editor of Jane's Space Directory. He is the recipient of the 1998 Rolls-Royce Award for Aerospace Journalist of the Year, a recipient of the Arthur C Clarke Award and is currently the editor of Spaceflight, the monthly space news magazine of the British Interplanetary Society. David lives in East Sussex.