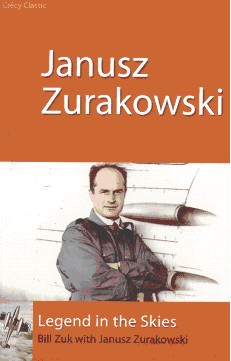 This product was added to our database on Tuesday 11 May 2010.

•
Paperback of best selling hardback
•
The only book on this extraordinary pilot
•
Spans the Battle of Britain, testing the early jet fighters and the notorious Avro Arrow
•
Unparalleled access to private family and company archives
•
A thrilling and compelling read
•
Illustrated throughout
The story of Colonel (Squadron Leader) Janusz Zurakowski spans most of the first 50 years of military aviation, in war and peace. Born in Russia at the beginning of the First World War to Polish parents, Janusz and his family returned to a newly emerged Poland in 1921.
By September 1939 Zurakowski realised his childhood dream to fly and took control of a training aircraft pitted against Luftwaffe bombers. When Poland fell he trekked through Rumania and France before finally reaching England to join the RAF.
Flying a Spitfire in the Battle of Britain with both the ‘Warsaw Group’ and 234 Squadron, Janusz rose to command a fighter squadron and led the Northolt Wing. He was awarded the Virtuti Militari, Poland’s highest decoration for outstanding acts or services in times of war and flew over 150 operational flights with Polish RAF squadrons alone.
At the end of WWII his exceptional piloting skills resulted in a new career as a test pilot. Graduating from the Empire Test Pilot’s School, he tested all the RAF’s latest aircraft at a time of rapid technological advances, before joining the Gloster Aircraft Company to test fly the Meteor, one of the world’s first operational jet fighters. A brilliant aerobatic pilot, Janusz invented the ‘Zurabatic cartwheel’, which stunned crowds at the Farnborough Air Show and remains one of the most incredible jet aircraft manoeuvres ever performed.
Following a spectacular career in England, Janusz moved to Canada in 1952 as test pilot with AV Roe Ltd on Canada’s first jet fighter - the CF-100 - and later the doomed supersonic interceptor aircraft, the CF-105 Avro Arrow.
An outstanding airman in both war and peacetime, Zurakowski is regarded by many as ‘a rare combination of skilled engineer, painstaking test pilot and unparalleled display pilot’.