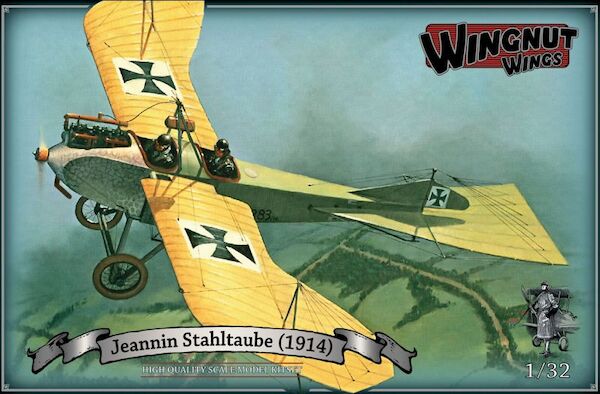 This product was added to our database on Wednesday 22 November 2017.

The delicate bird-like Taube came to epitomize early German aircraft design. Wealthy Austrian industrialist Igo Etrich based his successful Taube design on the stable gliding characteristics of the Zanonia (now Alsomitra) Macrocarpa seed as described by Professor Friedrich Ahlborn in his aeronautical research paper published in Germany in 1897. Igo began work in 1900 and was joined by his engineer, Franz Wels in 1903 initially developing models and then manned gliders before moving on to motorized versions. Their Etrich 1 Sperling (Sparrow) briefly took to the air in 1909 and was followed in April 1910 by the larger, more powerful, remarkably stable and comparatively safe Etrich II Taube (Dove). Fellow Austrian, Edmund Rumpler was impressed enough by the Etrich II that he obtained a 5 year exclusive license to build the Taube in Germany. Following further successful demonstrations of a 50hp Etrich Taube in October 1910 the Prussian military placed an order with Rumpler for 5 aircraft. Because the underlying aerodynamic principals of the Taube had been published by Ahlborn in 1897, Etrich was aware that it would be difficult to obtain a patent for his design in Germany and this was confirmed when the patent office rejected his application in September 1911. This essentially made Etrich"s design public domain in Germany so that almost anyone with an engine, enough fabric, wire and a few sticks of wood could legally build and sell their own copy of his Taube. Observing the dizzying array of copycat Taubes being churned out by dozens of his competitors, Rumpler simply refused to pay Etrich any license fees, continued to build the Etrich II marketed as the “Rumpler Taube" and became the largest supplier of Taubes to the German military. Etrich sued Rumpler in 1912 and numerous court cases continued between the two until 1930.

Ironically, it was “Frenchman" Emil Jeannin (born in Alsace which had only just been ceded to Germany after the war of 1870-71) who was responsible for one of the next most numerous Taube designs to equip the German military, the Jeannin Stahltaube 1914 “Military Type". Jeannin Taubes of 1912-1913 featured a steel tube framed fuselage and tailplane as opposed to the wood used by most other manufacturers, earning the name Stahltaube (Steel Dove). The “warping elevator" area of the tailplane was ribbed with flexible bamboo as were the “warping aileron" portions of the spruce & ash wings. The fuselage, wings and tailplane were covered with linen. The engine cowlings were sheet aluminium while the cabane and undercarriage struts were constructed from steel tube. These early Jeannin designs were distinguished by a propeller guard which curved from the bottom cabane section up to the nose, support girders under the wings, 100hp Argus 4 cylinder or 120hp Argus As.II 6 cylinder engines, a radiator mounted under the fuselage and vertically sprung undercarriage struts. The propeller guard and support girders were removed for the 1914 Military Type which also introduced a conventional “V" strut undercarriage, Hazet radiators on each side of the fuselage and were powered by 6 cylinder 100hp Daimler-Mercedes D.1 & 120hp Argus As.II engines. There was a single seat Jeannin Stahltaube as well as a kleine (small) version with a shortened fuselage and tailplane. Relatively conventional ailerons have been noted on a kleine version as has a Scheitelkühler (Brow Radiator) mounted above the engine. Emil Jeannin was imprisoned shortly after war was declared but production of his Stahltaube was continued for the German Army.

Unarmed A type monoplanes such as the Taube designs were utilized for reconnaissance but shortly after hostilities began airmen started carrying small bombs and personal firearms. The wider availability of more suitable B type biplane designs later in 1914 and more powerful, armed, C types in 1915 meant that no Jeannin Taubes remained in front line service after the middle of 1915, with surviving aircraft relegated to training units. Any history of these facinating aircraft here is of necessity very brief, therefore we encourage you to seek out the references mentioned below for a more thorough understanding of the Taube but please note that correct identification of the numerous Taube manufacturer"s design designations still does not appear to be fully resolved over a 100 years later.

WW1 colour schemes are contentious at the best of times and we have done our best to provide what we consider to be accurate painting information for this model. The steel tube framework of the Jeannin Stahltaube was painted light grey or grey-green while bare aluminium cowlings were given a “turned" finish. Photographic evidence shows that the fabric for almost all Jeannin Stahltaubes was opaque (not translucent) and appears to have been finished in a pretty standard German Army field grey. The single surviving Jeannin Stahltaube was restored in 1986 with a yellow-orange rubberized finish found on similar pre-war designs but it is not known how relevant this is for aircraft in military service. National markings were initially black eisernkreuz painted on the field grey fabric but difficulty in seeing these markings against the dark fabric is one reason cited for introducing the white square cross field in late 1914. At least one Jeannin Stahltaube served long enough to have had its eisernkreuz repainted with a thin white outline in late 1916. The various colour schemes applied to German aircraft of the Great War have attracted more than their fair share of debate over the years and, while we have been as meticulous as we could be, I’m sure some will not find our choices to their liking and impassioned debate will continue to rage on amongst modellers.